A former Intel employee leaks that the new AMD GPUs will have DP 2.1
Advertisement

We have already seen and known everything related to the NVIDIA RTX 40, specifically the RTX 4090, which we have analyzed in three different models, but… AMD remains silent, you already know the strict leak policy that it follows, therefore, that a former Intel employee is the one who advances a brand advance is, to say the least, curious. And yes, it seems that the RX 7000 will have DisplayPort 2.1 to his credit, which neither NVIDIA nor Intel has done on their GPUs.

If you stop to think about it, it will be clear that it is totally strange that a company like NVIDIA launches a graphics card as extremely powerful as the RTX 4090 and instead integrates DisplayPort 1.4a instead of at least version 2.0. Intel a little more of the same coming last to the ring, although better than NVIDIA since it does support DP 2.0. So why is AMD going to break the mainstream?

Verification from multiple sources that @Radeon Navi 31 will support upcoming DisplayPort 2.1 specification. I am tremendously surprised that @NVIDIAGeForce 4090 only supports DP 1.4a. Props to @LinusTech for calling out the DP1.4/4090 shortcomings! pic.twitter.com/4fmOtcnlth

Well, the answer is obvious and controversial in equal parts, yes and no. The yes comes from the fact that for all users who buy an RX 7000 (now we will go into specifying, because it is necessary) they will have better support for new batch monitors in the future, although due to power they cannot move the new games of the future, but that is another topic.

The does not arrive from the point of view of the connector and the costs. Apparently, DisplayPort 2.1 requires a more expensive physical connector, which is not really relevant because we are talking about just 3 dollars as we have been able to verify. But the main reason for saying that it’s not a real advantage is that currently and for the foreseeable future, DisplayPort 2.1 will not be included in gaming monitors.

The problem is that they are betting more on HDMI 2.1 than on monitors with DisplayPort 2.0, let’s not talk about version 2.1 in these RX 7000 anymore. The reasons are because the industry and panelists prefer to play it safe, diversify with TV, monitors and consoles, as well as on PC, while DisplayPort as such is exclusive to PC and the power of graphics does not reach new panels 8K and 144 Hz with version 2.1.

In fact, and to add insult to injury, there are no available specifications of the DisplayPort 2.1 standard confirmed by VESA or by DisplayPort.org, which is curious in itself.

How then is it possible that AMD has it and NVIDIA or Intel don’t? 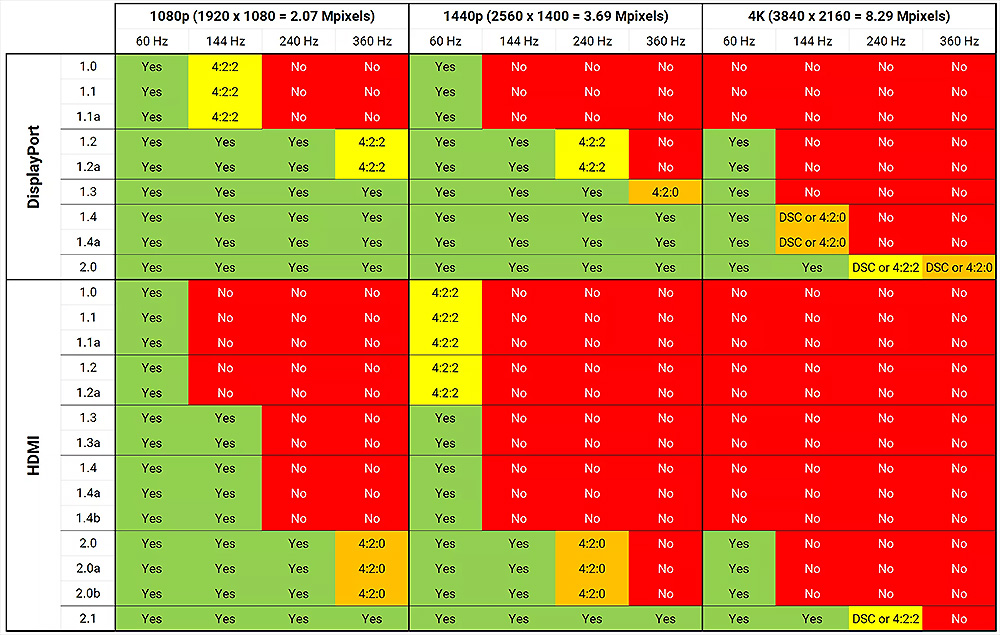 A big unanswered question, unfortunately. It seems, or at least gives the impression, that AMD has worked hand in hand with VESA to launch this standard and hence the exclusive DisplayPort 2.1 in the RX 7000.

Advertisement
Read  Intel creates an Arc A750 graphics card made with 6,000 LEGO pieces

What is not understood, at least in the case of NVIDIA, is that DisplayPort 1.4a has been included with the power of its RTX 4090, since it limits 4K and 120Hz the resolution and maximum hertz without having to use DSC or Chroma, same case for Intel, although this raises the compatibilities without compression to 4K and 144Hz matching what HDMI 2.1 does.

Therefore, it would have been more understandable in the case of AMD to use DisplayPort 2.0 and not DP 2.1 on the RX 7000, since it would also start with an advantage at a lower cost. But in the same way, it is appreciated that it innovates in this field and we hope that it will be a step for panelists and manufacturers to launch with this new standard that is about to be revealed.