Only one day after the official analysis by all the relevant world websites, MSI arrives and launches a new BIOS with a quite interesting function that promises increase the performance of the Ryzen 7000. This feature is known as “Performance Switch” and it will be just the prequel to what the brand has prepared for these new processors.

I think we cannot deny that from a gaming point of view, the Ryzen 7000 have disappointed a lot. While it is true that the data has changed depending on the cooling used and the motherboard, the average says that they are below the almighty 5800X3Djewel in the crown as a general rule of AMD until the new processors with 3D V-Cache arrive at the beginning of the year, which, yes, will compete beautifully with Intel.

MSI Performance Switch, this is how a BIOS increases the performance of the Ryzen 7000 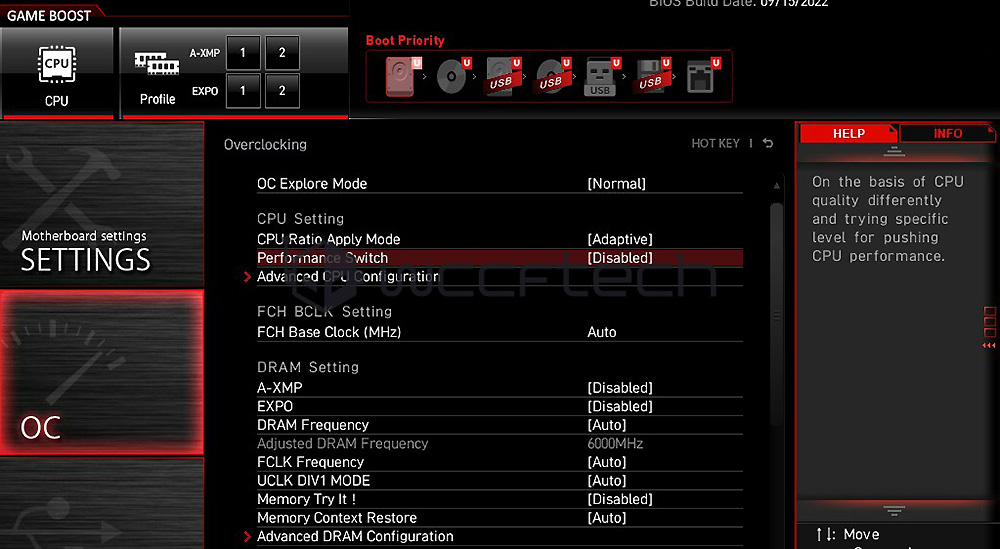 Well yes, it seems that MSI has found at the last minute how to improve the average performance of any Ryzen 7000 with just a few small steps. The function is named Performance Switch and it appears to result in the benefits of PBO along with manual overclocking.

That is, it is like activating Precision Boost Overdrive and that at the same time certain adjustments are allowed on our part. As a good tool, it is cataloged within overclocking and in this section of the new BIOS we can find it.

The novelty does not end there, since we will be able to change between three predefined profiles that will oscillate between Level 1, Level 2 and Level 3, but why is MSI bringing this out now and what benefits does it bring? Well, it seems that neither PBO nor separate manual performance settings achieve the most optimal results and that is where Performance Switch comes in.

The goal is to use the AMD algorithm allowing adjustments by the user and in three levels of aggressiveness, offering the best of both worlds and improving performance. 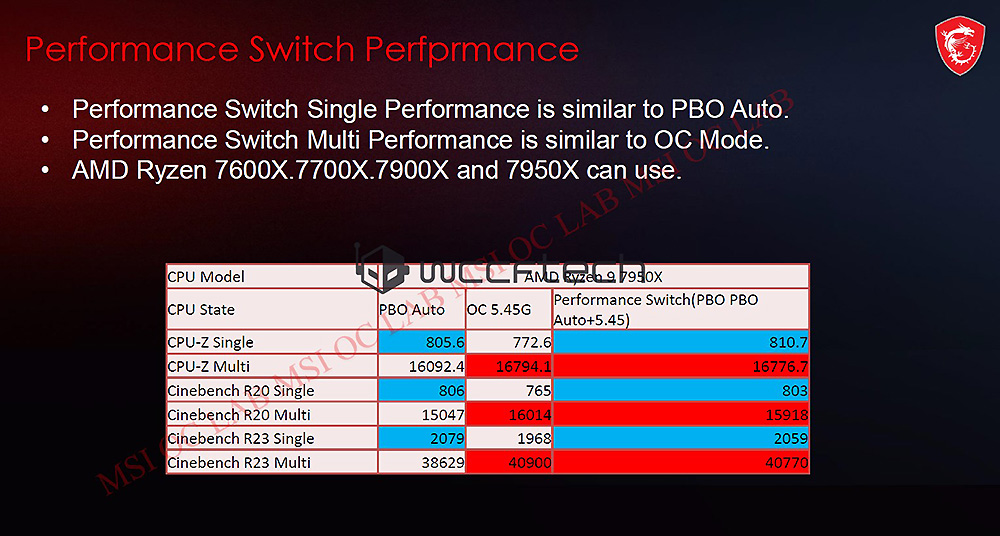 Interestingly, at a higher level we will also have better performance, yes, but the temperature is a bit up in the air. The reasons are the manual adjustment that can be made to the voltage for the frequency that is achieved. 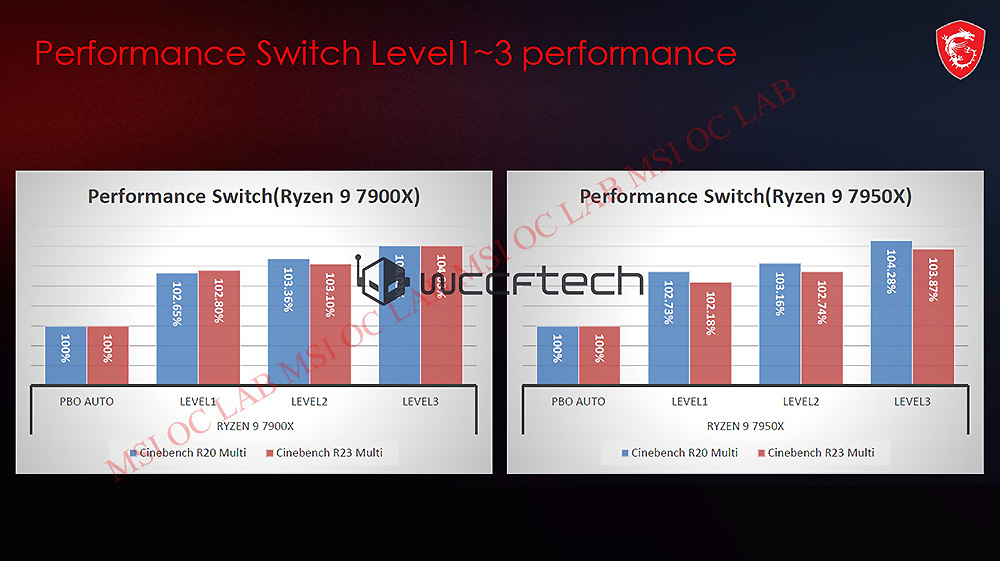 It is not that the difference is much, because they are very tight as standard and only with extreme overclocking can we go up, but for a normal user with mid-range or high-end cooling, they can be seen results over +4% in comparison with PBO Autoso it’s an interesting improvement with undervolt can mean even more performance by being able to push the frequency a notch higher.

The points of the different benchmarks make it very clear, it is not to boost performance in all scenarios, it is to make a set between Single Thread and Multi Thread more optimal, achieving that general improvement where AMD was weaker.

Three temperature levels to choose from 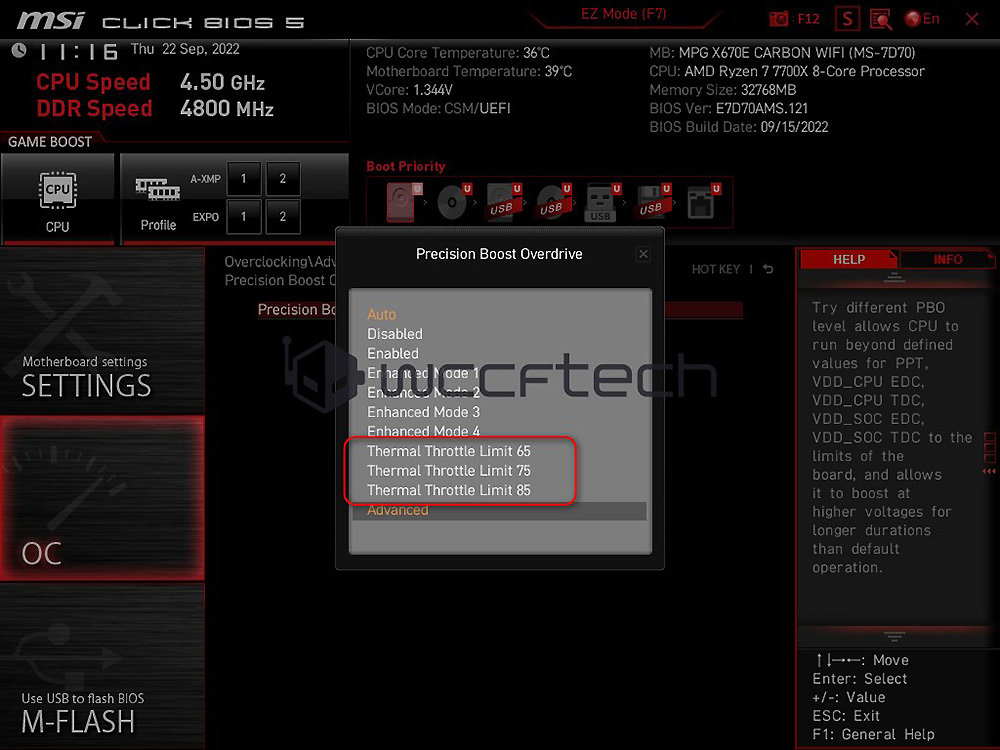 One of the most controversial points is the temperature, and for this reason MSI will allow three settings to be configured and predefined that will limit the PBO algorithm: 85ºC, 75ºC and 65ºC. Apparently, and according to leaked data from MSI, the sweet spot could be at 75ºC or 65ºC, depending on the CPU, where the consumption drops, the temperature remains stable and the score and performance either wins, or is very much at the pair.

Having seen this, we do not understand how AMD does not do this through its own PBO algorithm and AGESAit is too simple for the manufacturer and it only has to limit the temperature and follow the internal SKUs of frequency/voltage of each processor to obtain data or better or similar and on top of that not generate so much controversy. 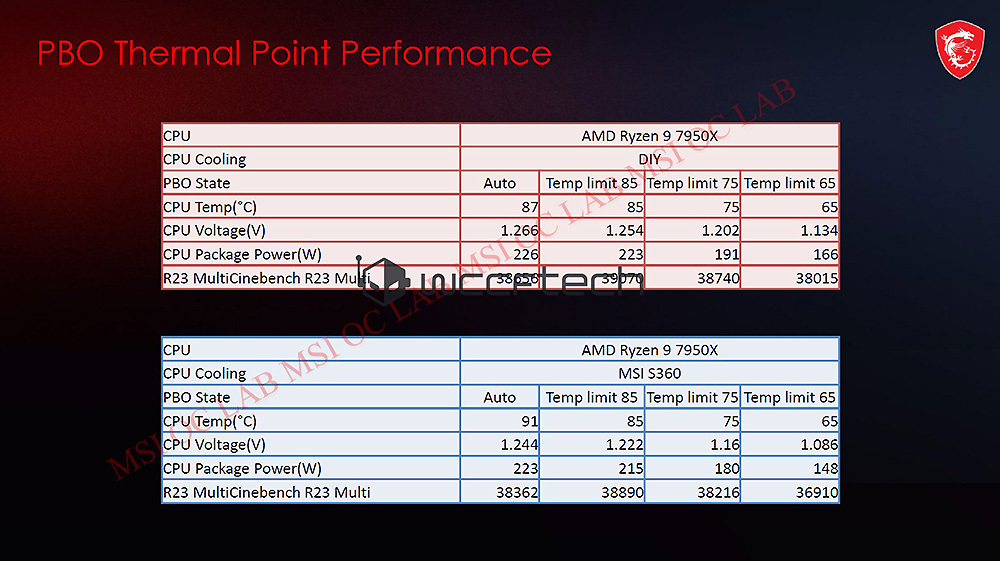 Seeing what MSI has achieved, they may end up considering it and include it, at least in Ryzen Master, because it is so simple that it is difficult for them not to end up including it in AGESA.

Four new PS5 and PS4 games can be tested without hand-pocketing, by all PlayStation gamers without special restrictions. As part...