It seems that the rumors that we heard behind the scenes and that we published two weeks ago are going to be true again. AMD’s famous “damage control” headline was not only correct, but it seems like all the alarms and sirens are spinning and blaring, because at a Lisa Su event with the watermarks what is to come has been leaked. And it is that the AMD Ryzen 7000X3D are close to having a date and they can arrive ¡even this year!

That’s right, it was not an exaggeration that the red team had advanced the launch of its processors to combat Intel, knowing that its Ryzen 7000 are not up to what was expected in gaming, the main market they are aimed at. . Therefore, it is time to move the tab.

I got better and bigger picture pic.twitter.com/Uf9Mq49cor

The red team had to have very clear information about what was happening at Intel, and this could have come from somewhere at TSMC. The problem with the blues right now is that Meteor Lake will not arrive in time, and as the brand recognized, Raptor Lake is a “patch” to alleviate the time GAP between Alder Lake and Meteor Lake, an evolution of the first taken to the limit with its “new” lithographic process Intel 7Ultra (direct evolution of Intel 7 logically).

Raptor Lake also has a new firmware for their cache and seek microcontrollers, where what is needed is for the AI ​​to learn faster through the driver and thereby improve specific points of performance. Therefore, and seeing the performance of the Ryzen 7000 in gaming where even the 5800X3D is above, what we are going to see was expected.

It has supposedly been at the AMD indo Grand Launch Party where the company has shown a part of its new roadmap, which is edited compared to the one we saw more than 6 months ago. In the slide shown we see how the Ryzen 7000 take their place in the Q4 of this yearbut versions are already referenced X3D thereof.

Could they reach the market this year?

The new 3D package has been completed, with 2 layers of stack validation, which will apply to the new CPU and GPU.

Something very curious has happened this time, and that is that Intel has been restrained in showing the performance of its Core 13 processors in the famous slide where it only marked the performance of the 5800X3D with lines. It looks like, actual performance will be aboveAMD knows it and therefore there are already quite powerful rumors about the fact that they could even arrive this year.

The general current affirms that they would be presented at CES 2023 in early January, but that those of Lisa Su already have them finished together with TSMC and on the production ramp. The proof of this is not only that AMD is already citing the Ryzen 7000X3D as coming even though it mentions them as TBAbut already in August TSMC had completed the implementation of SoIC 3D for AMD CPUs and GPUs, something I discussed two days ago in the comments with a user.

Paraphrasing myself, we commented that the novelty with SoIC is that due to the lower use of BUMPS, the Taiwanese say they have achieved a lower thermal resistance of 35% between the stacks. 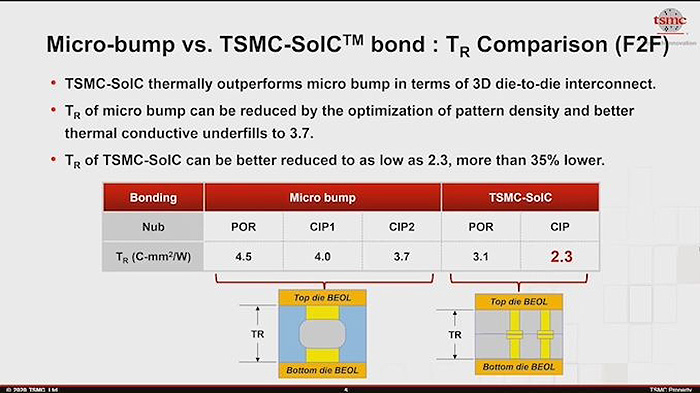 Now they don’t use common BUMPS, now they use microbumps with a CIP of 2.3 and a BEOL much smaller. But all this is not necessary for the 3D V-Cache in the Ryzen 7000, since the best example is the Ryzen 5000, it is simply used for the improvements that it integrates that the following factors will allow.

They are going to use it because the temperature of the Ryzen 7000X3D CPUs is uncontrollable by the IHS, the height of the die is going to be modified and this will imply reduce the more than 3 mm of welding, which will improve heat transfer and therefore reduce the resistance to the passage of heat. What we can expect are processors performing above 5 GHz and possibly at a thermal level similar to the original Ryzen 7000, with a greatly improved gaming performance that, now yes, it will surpass the Intel Core 13 by some adjusted percentages, but enough to tip the balance.

If, as we hope, Intel manages to put land in the middle with these new processors against the Ryzen 7000, without a doubt AMD has to get its act together and prepare the landing of the Ryzen 7000X3D announcing your performance date or launching rumors of arrival for the first quarter of 2023 or they will lose very important sales in favor of their rival.