On the occasion of the Canadian National Exhibition, ASUS decided to show in great detail a pair of X670E motherboards for the AMD Ryzen 7000. These are the ROG Crosshair X670E Herothe ROG Strix X670E-E Gaming Wi-Fi and TUF Gaming X670E-Plus WiFithat is, the top model of each series with the AMD X670 Extreme (X670E) chipset.

“The full launch of AMD’s long-awaited AM5 platform is drawing near. We’ve planned a full lineup of motherboards ready to take advantage of AMD’s next-generation CPUs, and now we’re ready to share details on three more of our upcoming motherboards.” gaming.

It is a motherboard focused on users who want to acquire a very high-end motherboard thinking about large doses of overclocking, improved connectivity, and of course, a touch of RGB. This looks like the socket AM5 is powered by a VRM 18+2 power phases capable of providing up to 110Aso we are talking about a board that must be linked to an overclocked AMD Ryzen 9 to enjoy its benefits.

By having the AMD X670E chipset, we are facing a motherboard with connectivity PCI Express 5.0 x16 thinking about the new generation of graphics cards, in addition to having access to one M.2 PCIe 5.0 x4 port to enjoy the speed of the next generation SSD.

The known information is completed with high quality sound through the SupremeFX sound card with a Quad DAC ESS ES9218PQ, we have access to the most advanced connectivity: Wi-Fi 6E + Bluetooth 5.22x ports USB4.09x USB 3.2 Gen2 ports, HDMI video output, and Intel Ethernet connectivity at 2.5 Gbps. 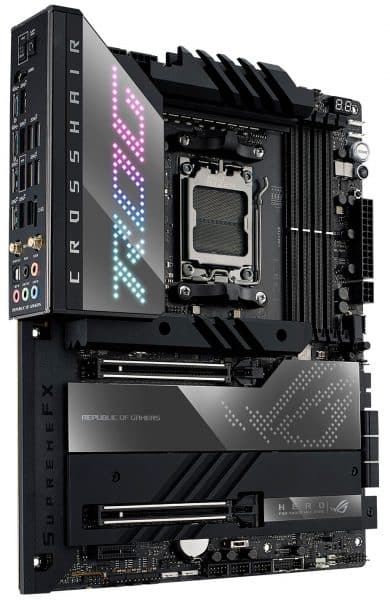 This model is still high-end, and perhaps it is the most recommended for the demanding gamer who in the future can be encouraged with overclocking to gain performance over time, and that is that we are still facing a motherboard with a VRM of 18+2 phases rated at 110A, while its aluminum heatsinks maintain the copper heatpipe for cooling.

This model includes the new anchoring system for the GPU, where you have to push a button to release it, the SSD’s heatsink has a copper heatpipe so that the PCIe 5.0 SSD offers excellent performance and, like the previous model, we have a switch to disable the second PCIe x16 lane, buttons for Power, Reset, Clear CMOS, Display to see if there is any problem in the system in form of a numerical code,

Without having more details to compare, it seems like a better option than the previous model, since you will basically have the same performance but paying less. 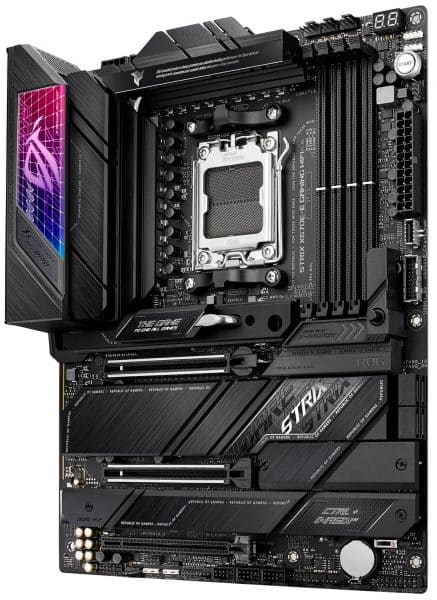 The TUF Gaming range is the most basic for gamers, but this is not a bad product, because at least we have a 16 phase VRMwhich is more than enough to power and overclock any AMD Ryzen 7000. Proof of this is that it maintains the same power configuration as the rest of the models: 24-pin ATX connector + 2x 8+8 pin EPS.

Regarding the rest of the models, we lose the RGB, the VRM cooling system is aluminum heatsinks without the copper heatpipe, the SSD heatsink is also only aluminum, we see cuts in the sound section, but it still maintains the essentials for the future: PCI-Express 5.0 interface and the possibility of installing up to 4x SSDs. This model maintains WiFI + Bluetooth connectivity.

Come on, that’s one more motherboard than functional for 99 percent of gamersand much more accessible at a monetary level. 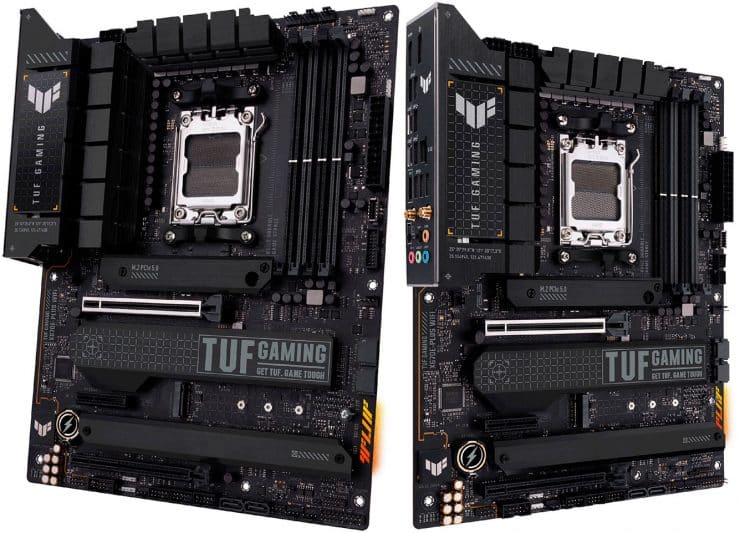 As a bonus track, the ASUS ROG Crosshair X670E Extremethe top-of-the-range model, although it only showed an image and did not detail the information.

From this we knew that it offers a VRM of 20+2 phases (110A), allows to install up to 5x SSDs, we run into the sound card SupremeFX ALC 4082dual Ethernet port in the form of a Marvell AQtion @ 10 Gbps + Intel @ 2.5 Gbps, increases RGB lighting, and has exclusive ports for components of a Custom liquid, such as the water pump for better management of it.

The most remarkable thing you will see in the image, is that all the ports on the side they are hidden with a cover, while these have seen their layout reoriented to allow a cleaner assembly of the system, since all cables exit laterally instead of vertically. 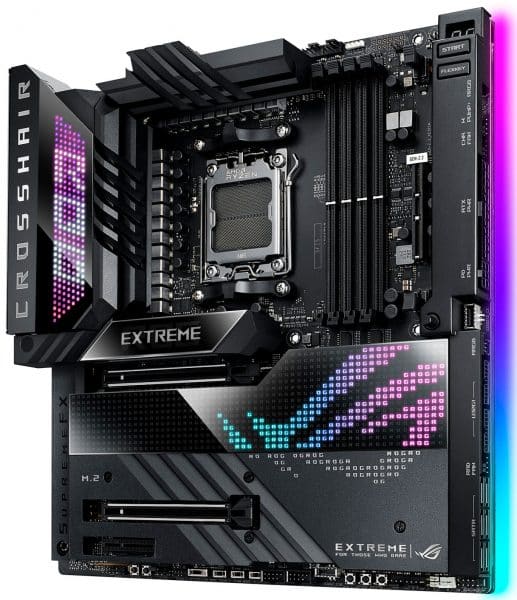