Intel met today with the President of the United States, Joe Biden, plus the Governor of Ohio, and other federal, state, and local officials, to celebrate a major milestone: the groundbreaking on Silicon Heartland. These works involve starting to build two of the most advanced chip manufacturing factories in the world.

“Today marks a pivotal moment in the journey to build a more balanced and geographically resilient semiconductor supply chain. The establishment of the Silicon Heartland is testament to the power of government incentives to unlock private investment, create thousands of good-paying jobs and benefit America’s National and Economic Security We wouldn’t be here today without the support of leaders in the Administration, Congress, and the State of Ohio, who share a vision to help restore America to its rightful place as a leader in advanced chip manufacturing. said Pat Gelsinger, CEO of Intel.

The start of a $100 billion investment

This pharaonic project of creating a campus is based on an initial investment of more than $20 billion to create a new semiconductor manufacturing site to produce state-of-the-art chips. This investment is destined to cover the expenses associated to the first two factories, which will be built simultaneously. Far from any number of wafers, this project will create 7,000 jobs during its construction, and 3,000 long-term jobs in manufacturing and engineering. These factories are expected go live sometime in 2025.

The new campus will have an area of ​​about 4 square kilometers and can accommodate up to eight semiconductor factories, as well as supporting operations and ecosystem partners. To build the site, Intel will need to invest about $100 billion, the company said at the time.

Information on the first Intel wafer factories in Ohio 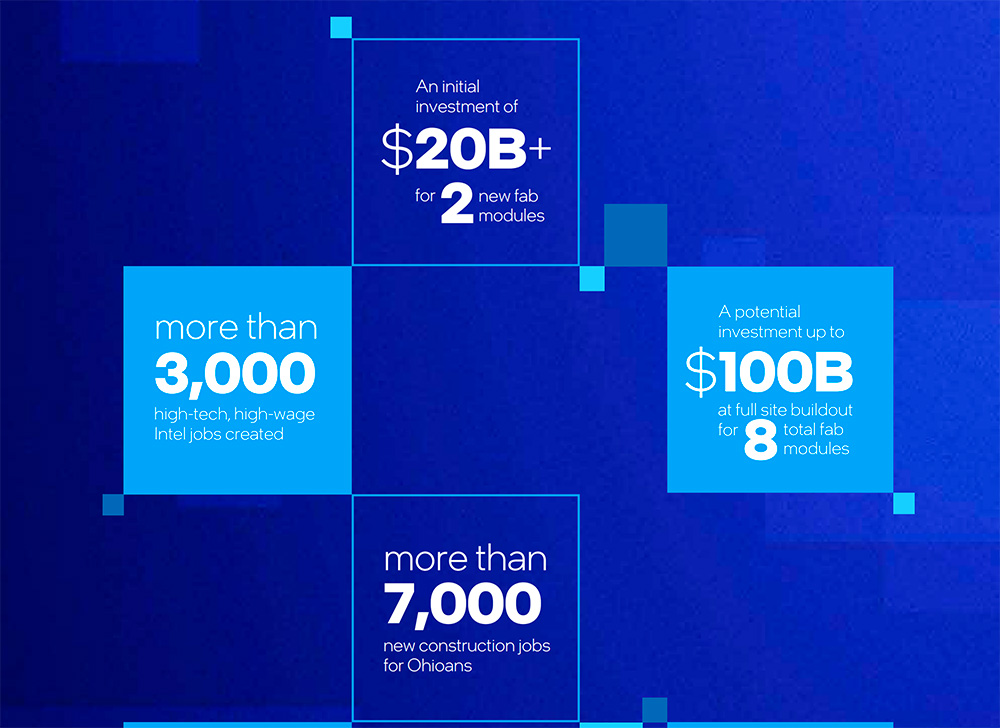 That said, new factories can be expected to make extensive use of extreme ultraviolet lithography (EUV) of the current generation, with a numerical aperture of 0.33, as well as next generation EUV tools with an aperture of 0.55.

These factories will produce wafers both for Intel’s own benefit, such as to manufacture third-party chips. That is, the customers of your foundry business Intel Foundry Services (IFS).