If you’re one of those who work on different teams or simply want to expand the storage capacity of your favorite console, drives like the KIOXIA EXCERIA PLUS Portable SSD they can be a great ally, because, although the cloud is increasingly present for many, it is difficult to reach 1,000 MB/s in it. Also, if you have a modern console like the Playstation 5 wave xbox series x and you want to expand its storage capacity externally, units like the one we are analyzing can be a success, especially for the comfort and portability they provide. 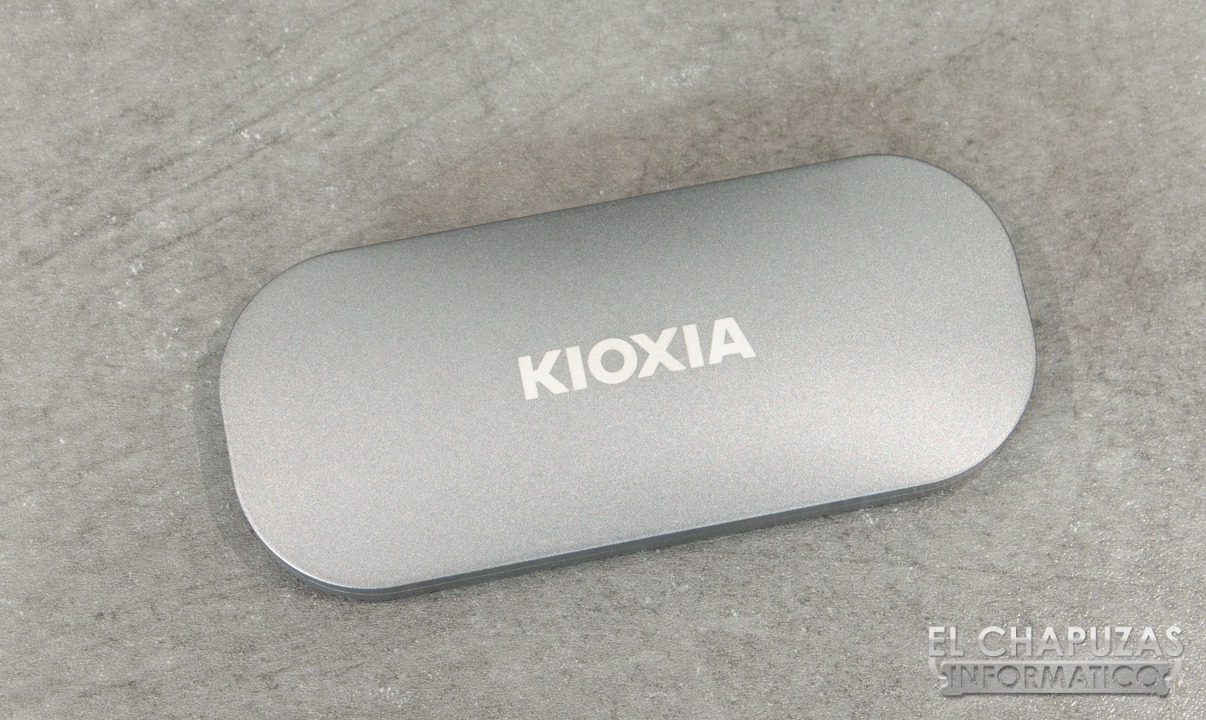 Before starting the review we want to thank KIOXIA your trust in us by giving us this EXCERIA PLUS Portable SSD for our review.

The KIOXIA EXCERIA PLUS Portable SSD It comes in a small cardboard box that shows the product on its front, indicating that the image is real size so that we can get an idea of ​​it. Unfortunately, not even on the back does it include information about its technical specifications or main features, beyond the capacity of the unit. 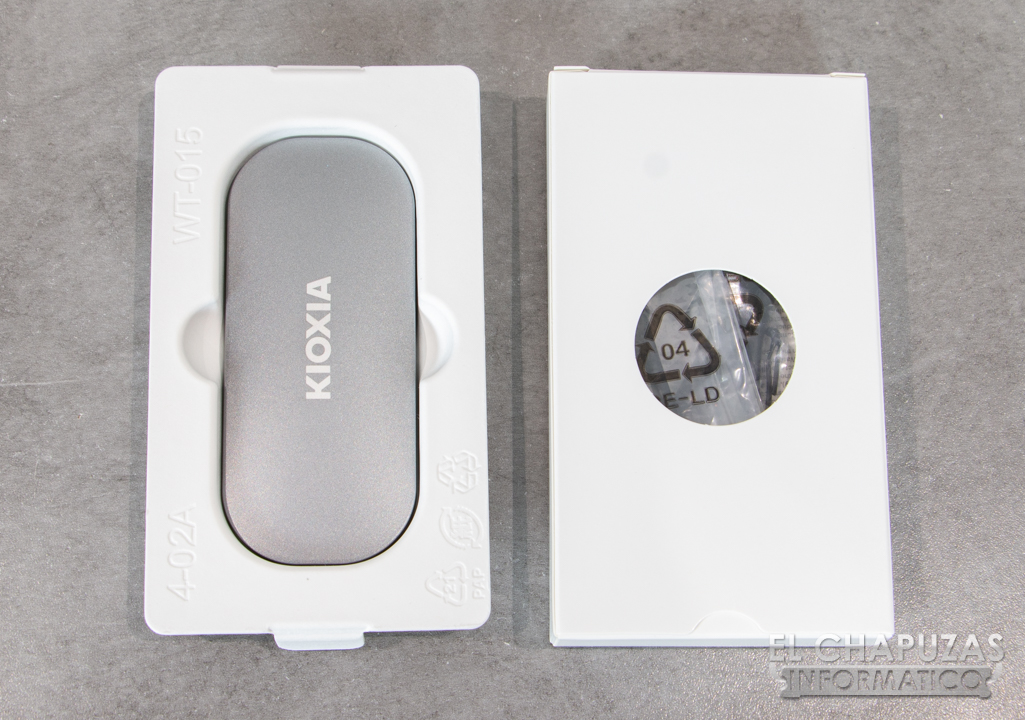 Inside, the unit is protected by a cardboard box, while the accessories are in a second box of the same material. 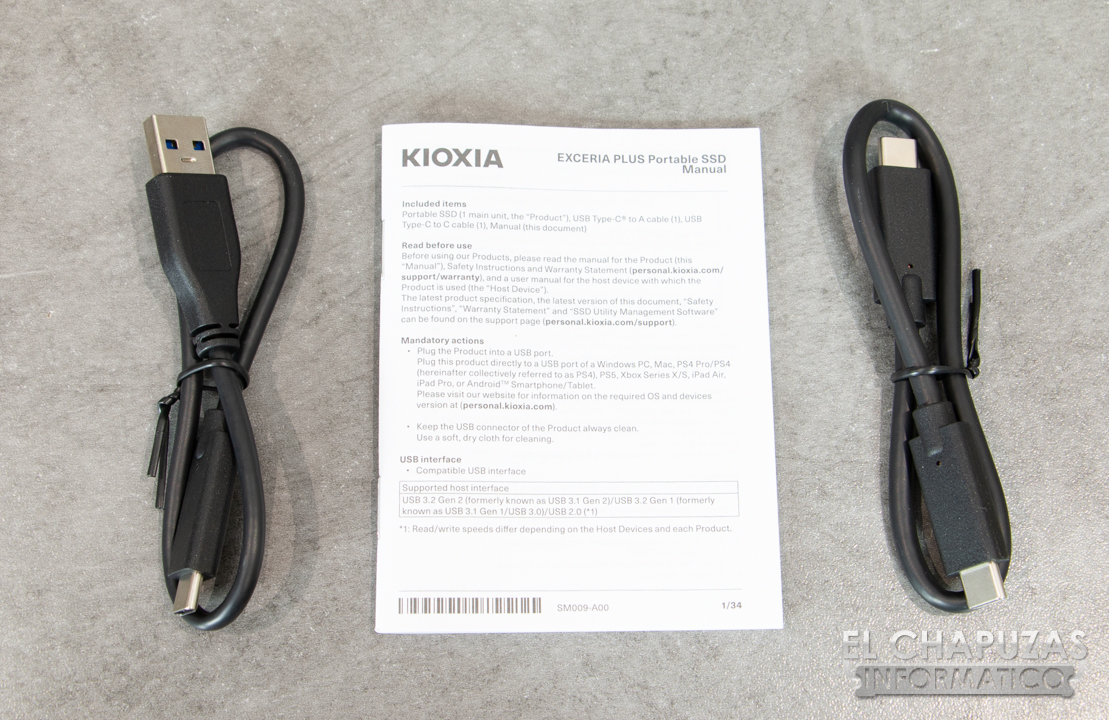 In addition to the user manual, a USB-C/C cable and other USB-A/C cable that allow its connection to the PC, whether we have a USB-C port or not. They are lathe cables, about 30 cm long, something to always keep in mind if we plan to place the unit very far from the PC, as we would need an additional longer cable. 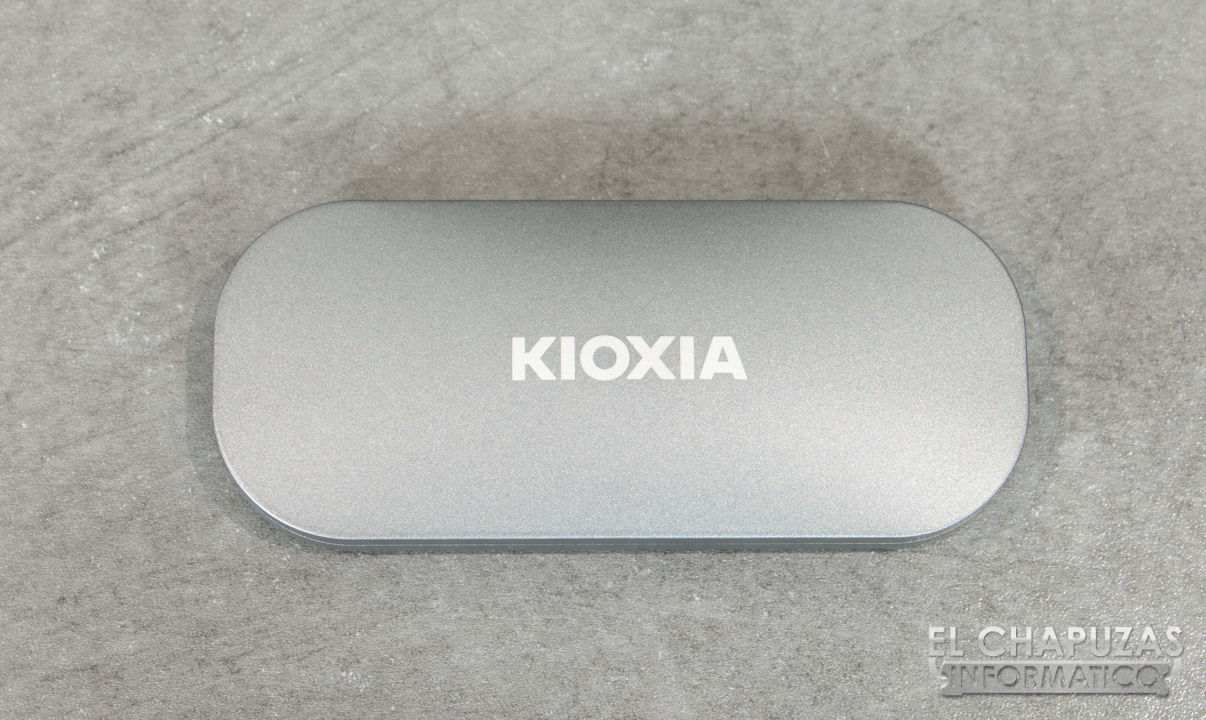 Once we extract the KIOXIA EXCERIA PLUS Portable SSDwe find a compact unit of only 105 x 45 x 14.7mm that could not be more portable, because its small size adds a weight of only 76 grams. Made in aluminumit has a minimalist finish on the front that looks great on it, although as we will see later, on the back you can see the screws in a rougher way that do not finish harmonizing with its design. 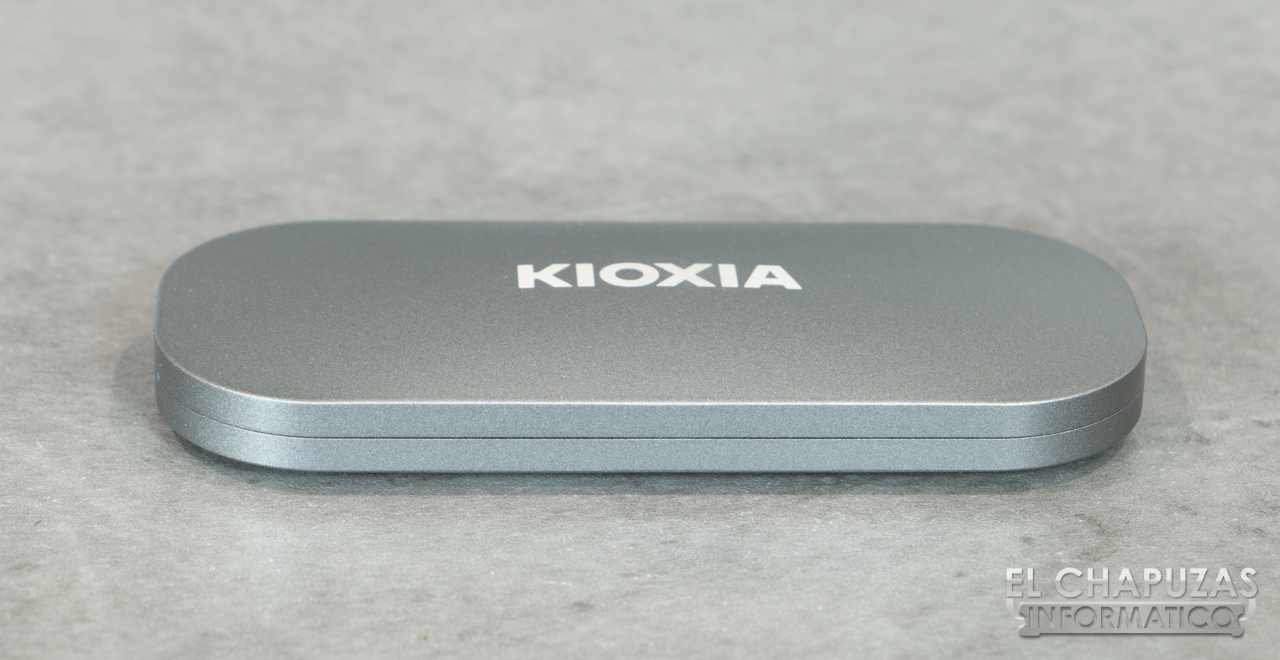 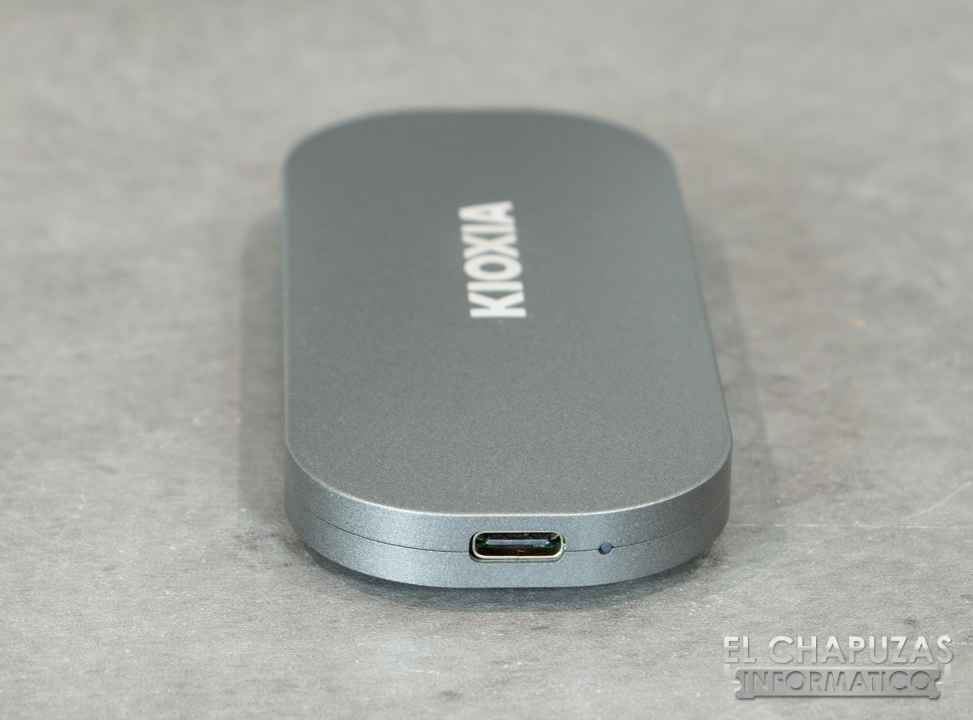 On one of its sides, we find a connector USB3.2 Gen2 that allows connection to the PC or even to an Android smartphone, being backwards compatible with other USB standards, although obviously with limitations in the speeds achievable by each one of them. Equally obvious is the incompatibility with Apple mobile devices, at least as long as they keep the Lightning connector. 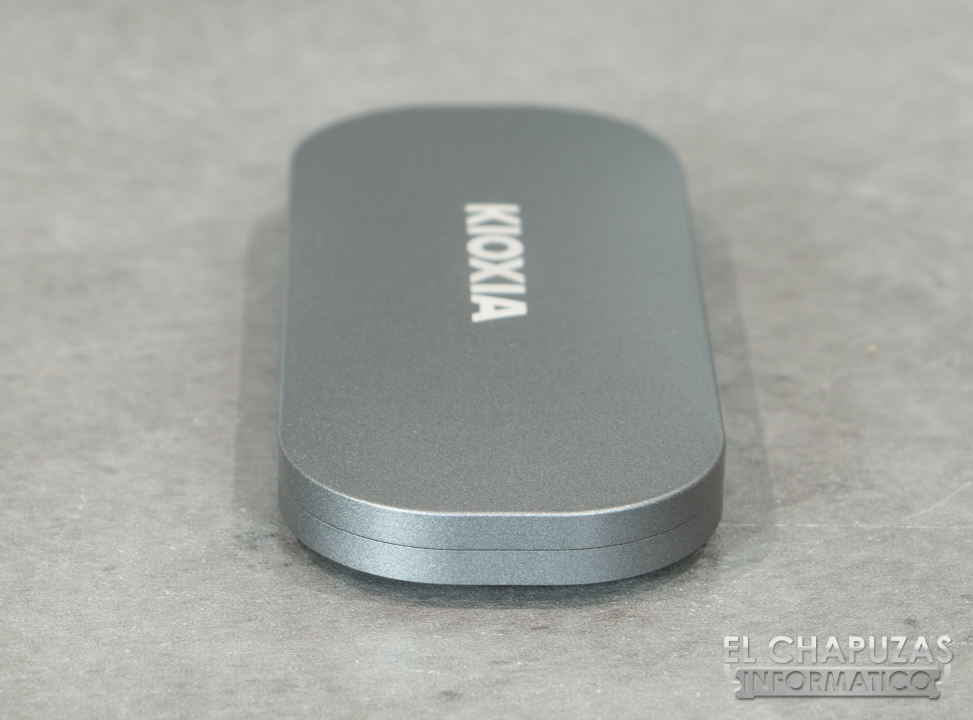 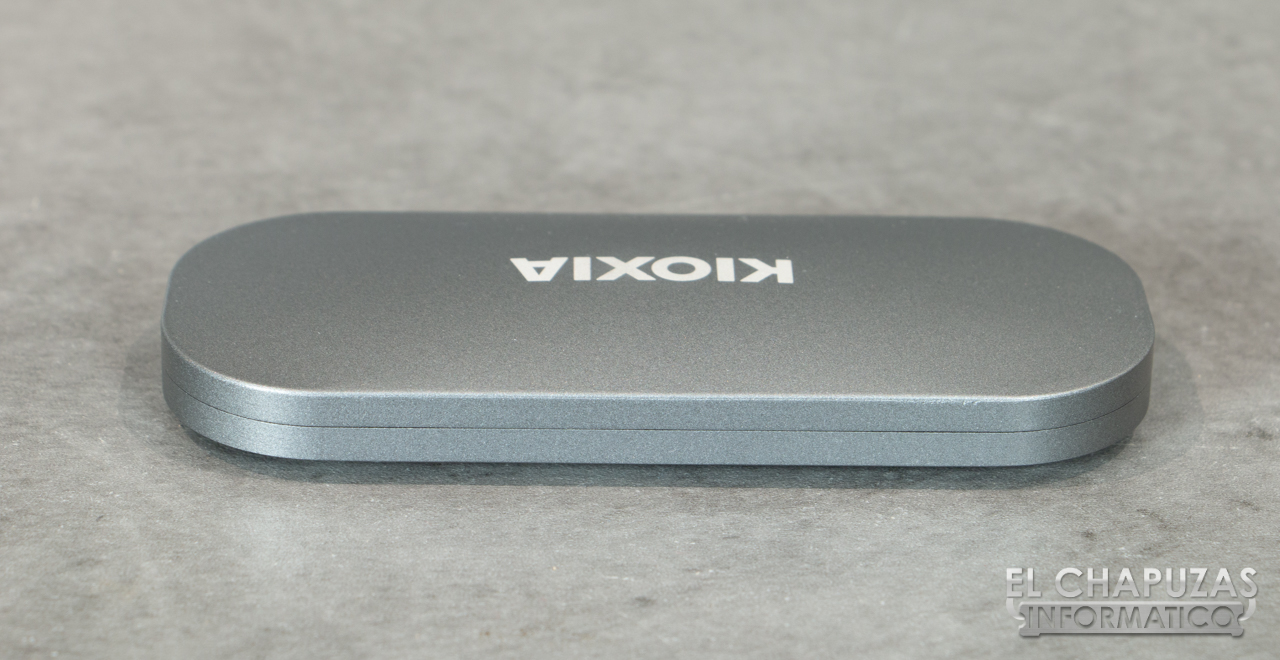 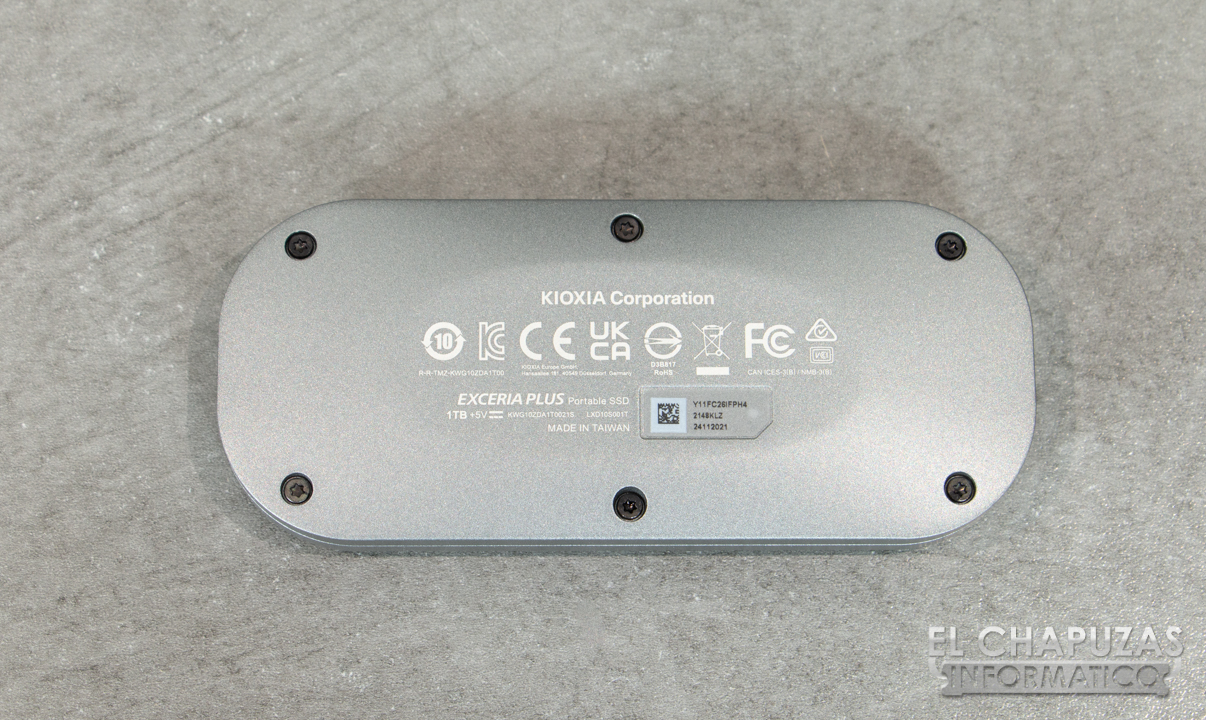 We remove the screws to access the interior of the SSD, verifying that inside there is an M.2 unit of conventional format (2280) and a SATA to USB controller. 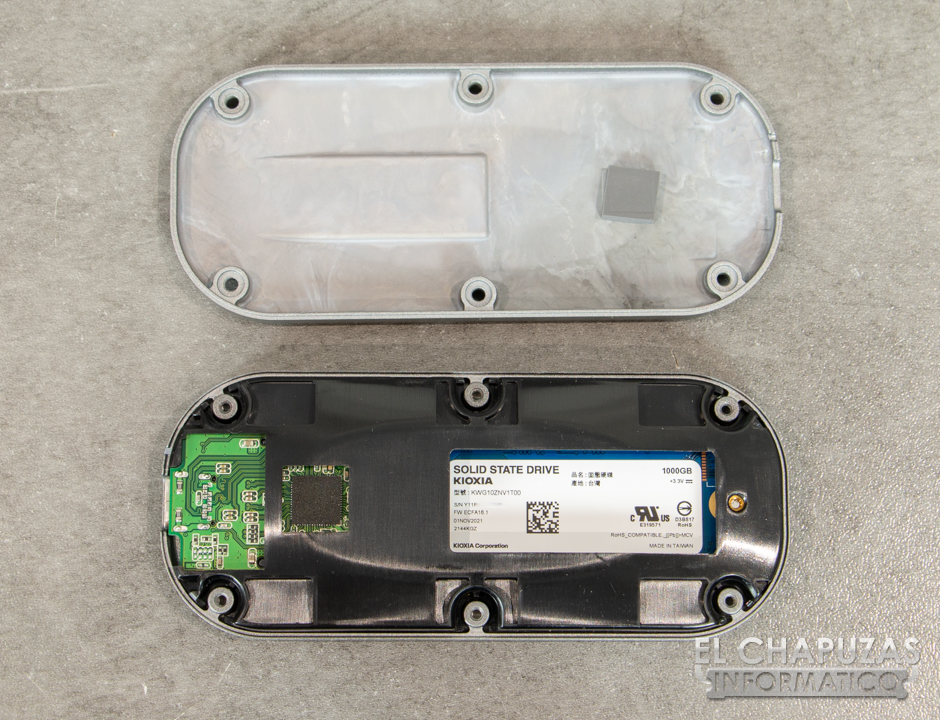 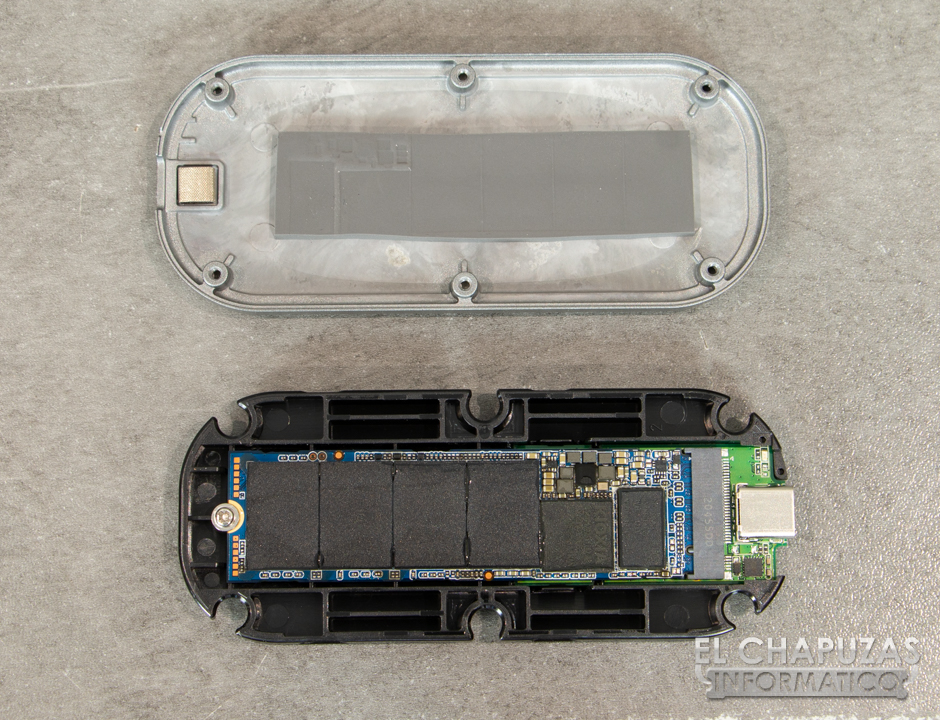 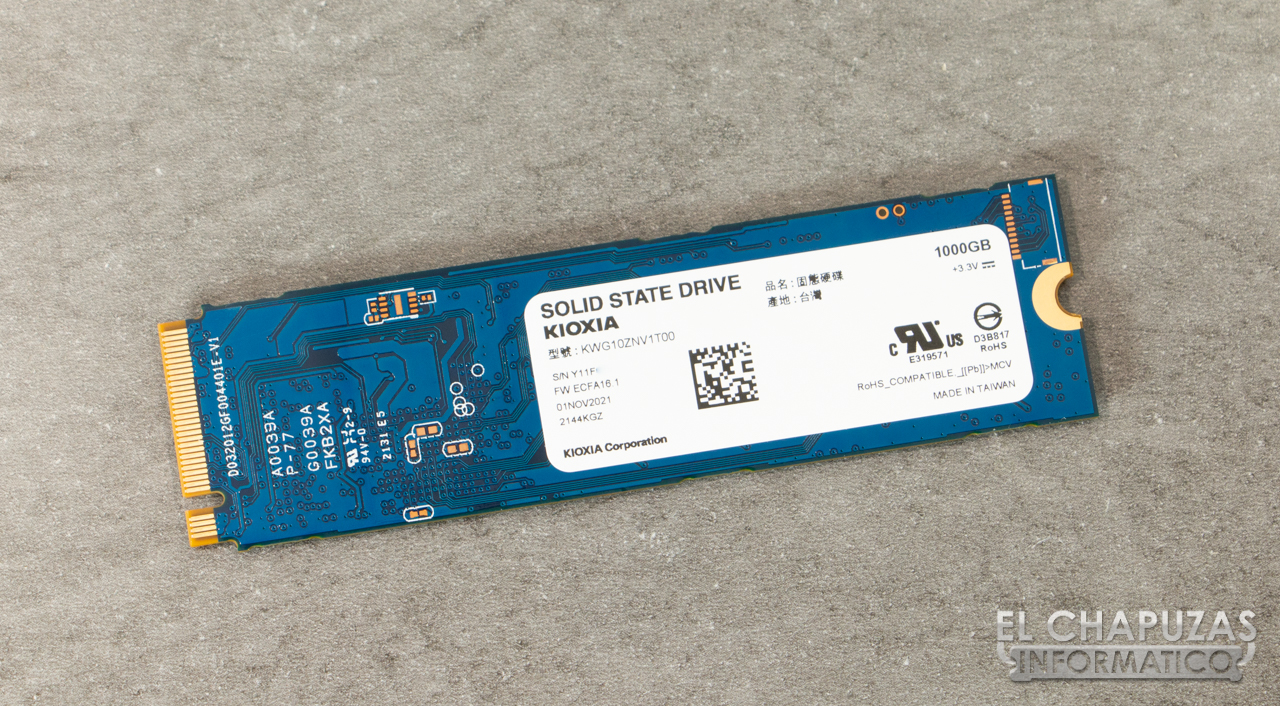 Specifically, this unit has an SSD from KIOXIA itself in format M.2 NVMe PCIe Gen3 Capable of reaching maximum sequential read/write rates of 1,050/1,000MB/s. For this, it has a proprietary controller, memories BiCS FLASH 3D and a RAM memory chip signed by Hynix. 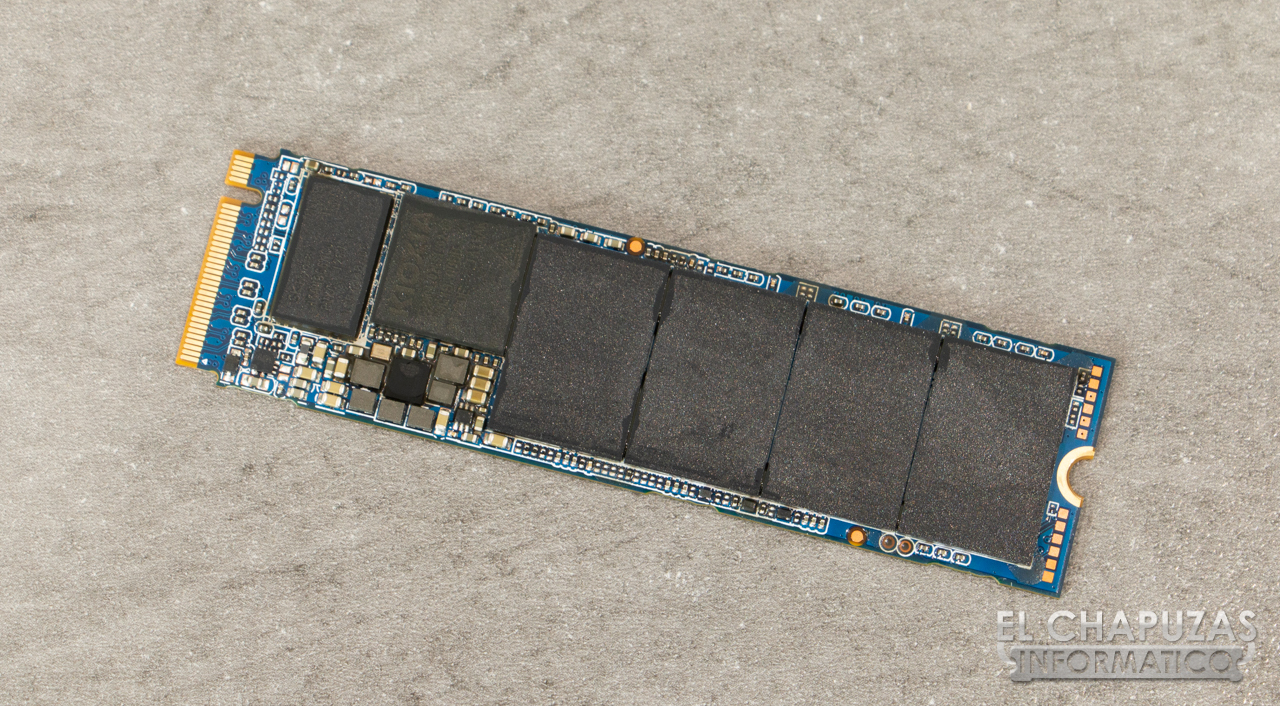 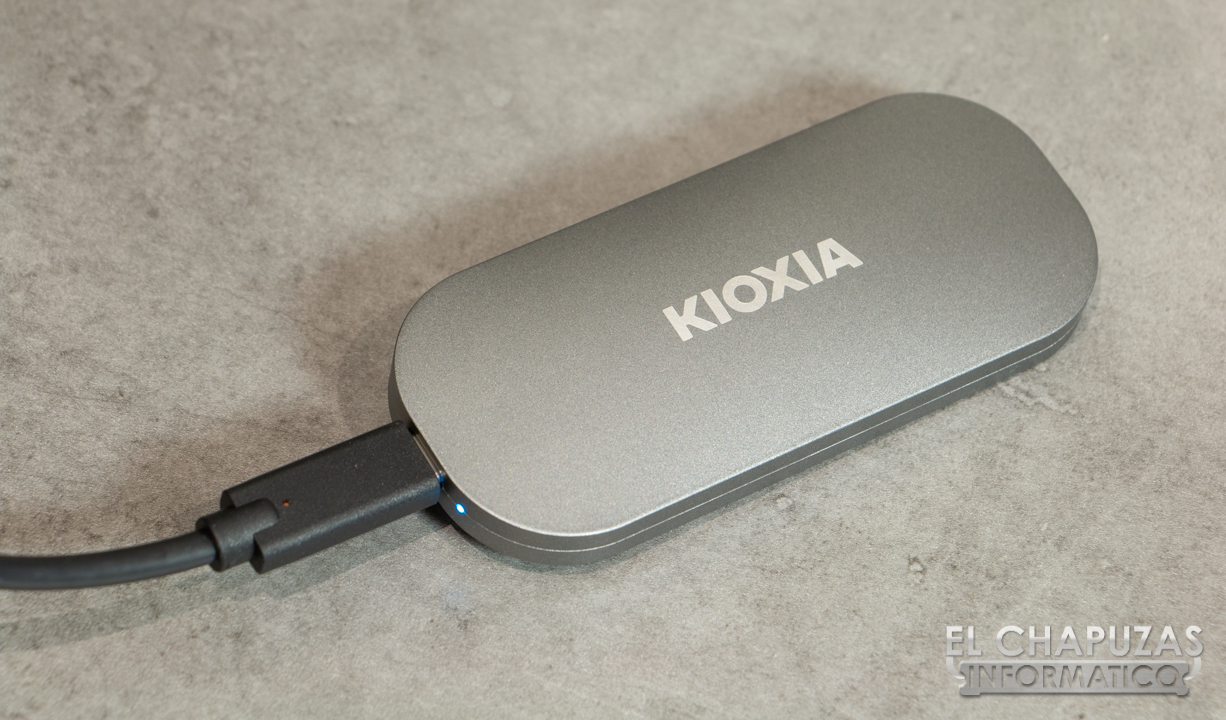 We connect the KIOXIA EXCERIA PLUS Portable SSD to our test team, obviously in a USB 3.2 Gen2 port, otherwise we could not get the most out of it.

First of all, we analyze the working temperatures, checking how at rest it is around 40ºC and at full capacity 50ºC. These are very good figures that are largely achieved by its aluminum casing, which helps to cool the M.2 unit, although with its speed, it is not that they would skyrocket as if it happens in PCIe Gen4. 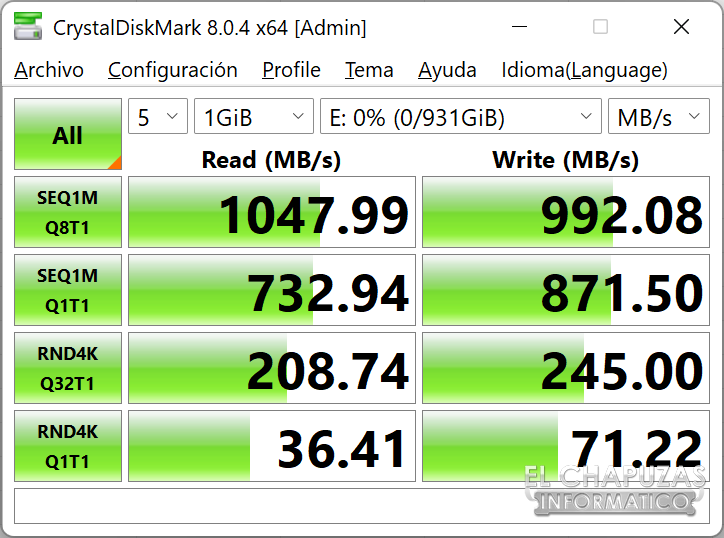 As the specifications promise, we have been able to confirm with CrystalDiskMark that we have sequential read and write rates of around 1,000MB/s, more than enough to move large files with ease. But perhaps even more important are the random access rates, since they allow you to work with a large number of small files at good speeds. 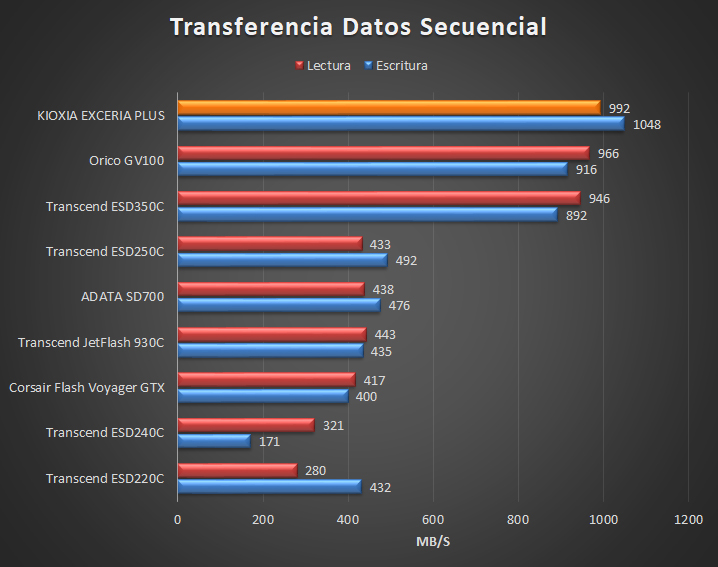 As we can see in our comparison, the KIOXIA EXCERIA PLUS Portable SSD it is the fastest external drive we have tested to date, followed by other models with an M.2 drive inside, which offer similar values. Obviously, they are a long way from the old SATA to USB interface drives, but not at the level of desktop models. For this there are USB4 / Thunderbolt 4 enclosures and units, although their prices skyrocket. 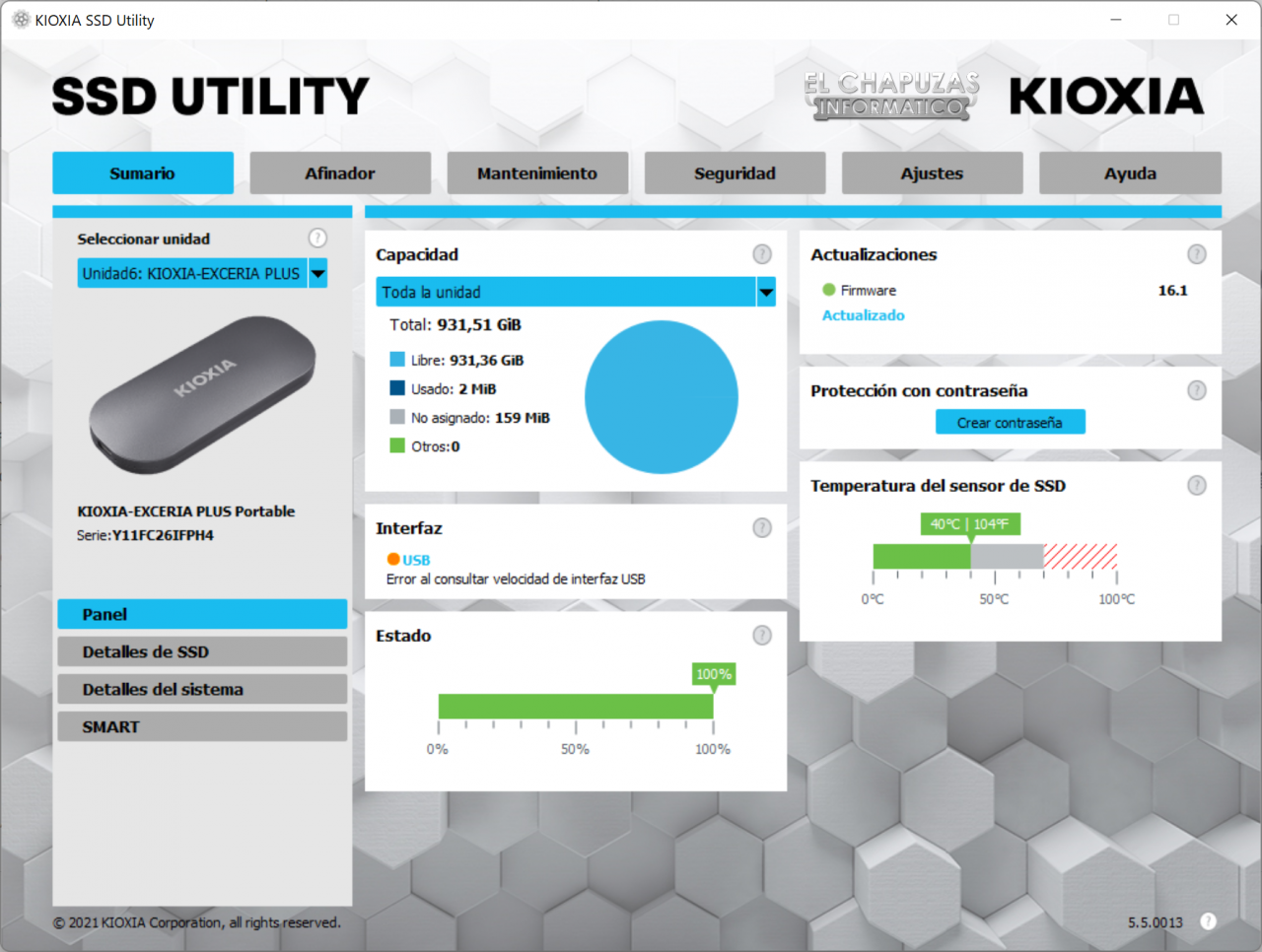 We finally take a look at KIOXIA SSD Utility Software, which allows you to update the firmware if necessary, not in our case, and check the status of the unit. We can also configure a password to access it, something interesting if we have important data to protect.

After reviewing the KIOXIA EXCERIA PLUS Portable SSD we can say that it is an excellent option for those users who are looking for safeguard your data either use them on different computers with the need for performance. reach rates 1,000MB/s it is within the reach of few portable models, being a figure that allows you to move large files without problems, while the speed of random access allows you to work with large amounts of small files without any problems. In addition, we must highlight its portability, as it is quite compact, although somewhat heavy as it is made of aluminum. Of course, this material allows temperatures to be kept at bay, something always important in SSD units.

The 1 TB unit analyzed here is around 129 euros, a very competitive price within the portable SSD sector, since other alternatives are clearly more expensive or offer lower performance. For its part, the 2 TB version is around 255 euros, a price proportional to its capacity.

Since The computer bungler we give you the Platinum Award to SSDs KIOXIA EXCERIA PLUS Portable SSD. 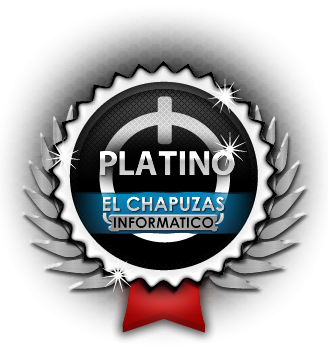