Without making much noise, on the official website of NVIDIAwe can already see the first performance tests of its new top-of-the-range GPU, the GeForce RTX 4090running games at a resolution that is not very accessible at the moment, we are talking about 8K.

No, it is not an oversight déjà vu, since in the past with the previous top-of-the-range GPU the company also promoted what would be the first GPU on the market capable of running games at such a resolution. At least on this occasion, we could say that it is a very suitable GPU to play at 8K, although of course, in most cases we will have to resort to its brand new technology NVIDIA DLSS 3. 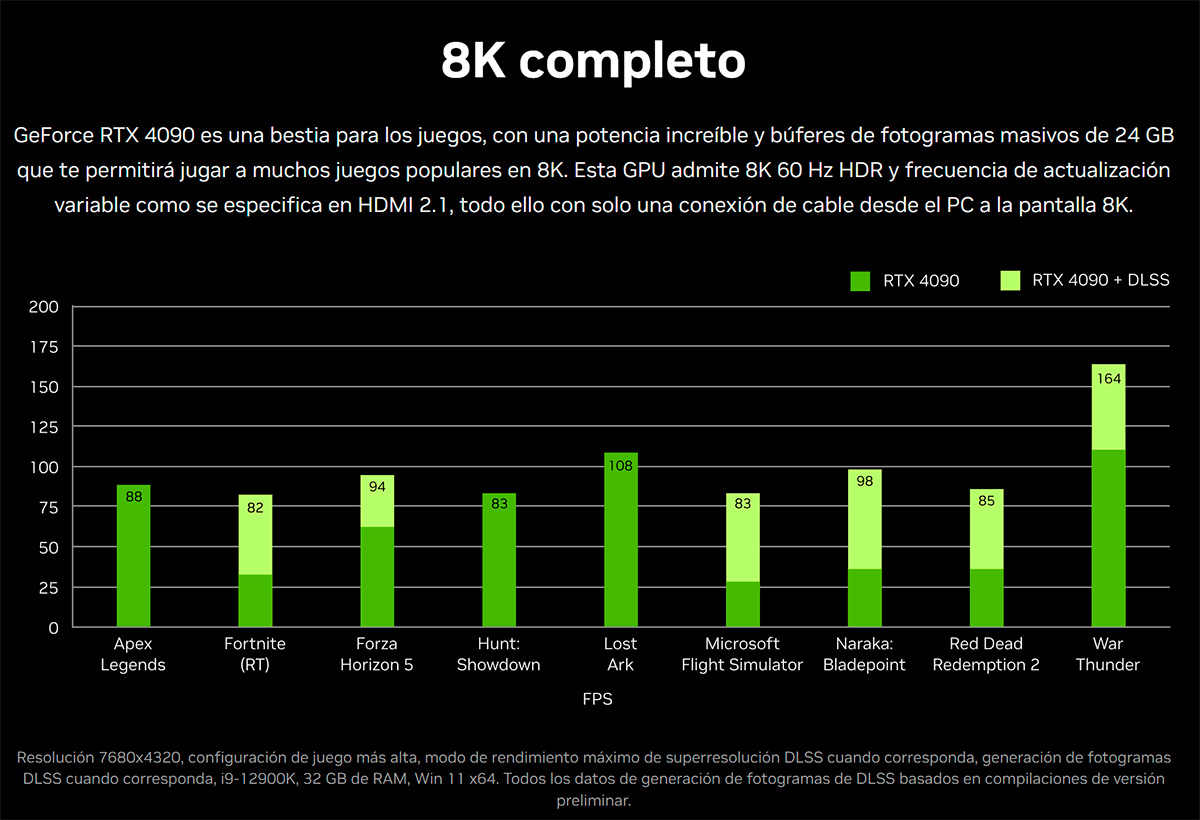 According to the company, in undemanding games like Apex Legendsyou can reach the 88 FPS without resorting to any technology of rescaling. But of course, in much more serious games like Microsoft Flight Simulatorthe GPU will go from running to about 27fps to reach the 83fps activating the DLSS 3. The same happens with the Red Dead Redemption 2which will go from moving at about 35 FPS to 85fps with rescaling technology. This performance was achieved by running the games at 7,680 x 4,320 pixels with graphics settings Taller possible, and the GPU was accompanied by an Intel Core i9-12900K, 32 GB of RAM and the Windows 11 operating system.

Obviously, 99.99% of users, if not 100%, he doesn’t care about 8Kbut extrapolating the data, we could say that 4K with a high refresh rate they are more than viable, and more so if DLSS 3 enters the equation. And yes, 4K with a high frame rate already matters to many people, and more so to those who buy a new generation GPU of this type.

Additionally, the company has already listed the official launch price of its GPU for the USAmarket. In short, we are talking about a starting price of €1,959. As a starting price, it is understood that the most economical model, the Founders Edition (reference cooling system), it will have this cost.

As we could see a few days ago on Coolmod, this price can increase or decrease depending on the assembler. As an example, in said store they have a KFA2 GeForce RTX 4090 ST listed at a price of €1,899.94.

This notable price difference has a reason, and the truth is that NVIDIA has done something ugly, and that is that the 12 GB model integrates 7,680 CUDA Cores and the memory is attached to an interface 192 bitwhile the 16 GB model has 9,728 CUDA Cores and a memory interface 256 bit. Ultimately, what It should be an RTX 4070 with 12 GB of memory instead of sharing the name of the GeForce RTX 4080, everything is said.