Just a few days ago the NVIDIA RTX 40 were announced and the company has shown us some official performance charts. But, in addition, we have tests of how it really performs in games. Well, we have to clarify this, because it is a small filtered demonstration of the RTX 4090 in Cyberpunk 2077being able to see performance, temperatures, consumption Y DLSS 3. Also, we will see a comparison against the RTX 3090 Ti under the same conditions, being able to discern between both and see the real change between both generations.

We have waited 2 years for NVIDIA to release a new range of graphics cards that will replace the RTX 30 that have been on the market since 2020. RTX 40 bring numerous improvements, starting with the Ada Lovelace architecture, the manufacturing process at 5nmfactory frequencies over 2.5GHz and a new generation of Tensor Cores willing to squeeze DLSS 3 to the max. And it is that this scaling technology is going to bring a very noticeable FPS increasealthough there are also numerous complaints about ghosting and artifactssomething that we hope to deal with in detail in a future review Digital Foundry or other means.

First of all we will start with the official data given by NVIDIA, with the classic performance graphs. In these, a PC consisting of an i9-12900K, 32 GB of RAM, the RTX 4090 and 64-bit Windows 11 has been used. Regarding the games, all have been tested to native 4K resolution and with DLSS 3 in Performance mode. As we can see, none of these titles using scaling technology has dropped below 60 FPS, although an exact figure for performance in native resolution is not given. The complete list of games and FPS in this configuration will be:

Now we move on to what many of us were waiting for, the performance filtering in games. And it is that, we already have with us a demonstration of the real performance of the NVIDIA GeForce RTX 4090, the highest range of the company (for the moment). This has been used in the popular game Cyberpunk 2077, one of the most demanding titles on PC today. To carry out this test, the PC has been used with a i9-12900K and the RTX 4090 Founders Editionexecuting the Cyberpunk 2077 to resolution 1440P with graphics in mode Ultra Raytracing Psychothat is to say everything as much as possible.

This test has been using the native resolution without DLSS and has resulted in an average of 59fps (49 FPS 1% Low) next to a latency of between 72 and 75 ms. Although the first impression of this may be the But it does not even reach 60 FPS!, It must be remembered that this game with graphics in Psycho barely gives more than 30 FPS on an RTX 3090 Ti (as we will see later). What impresses us about this little demo is that the RTX 4090 reaches clock rates of up to 2,850MHznamely, 330 MHz more than factory and without overclock.

Ok now things get interesting, and that is that we will talk about performance with DLSS 3. But, before that, we must comment that it is indicated that this is a official pre-release version, so the performance will change. That said, this time Cyberpunk 2077 is running with the same settings and resolution but with the addition of DLSS 3 in Quality mode.

It is at this moment that a huge leap in performance is made, since we went from the average 59 FPS before to the 170 FPS on average. Furthermore, the rate of 1% that in native resolution was 49 FPS is now 119fps. Not only that, but the measured latency drops to as low as 53 ms, resulting in a 30% lower latency and more than 2x FPS wearing DLS3 Quality. 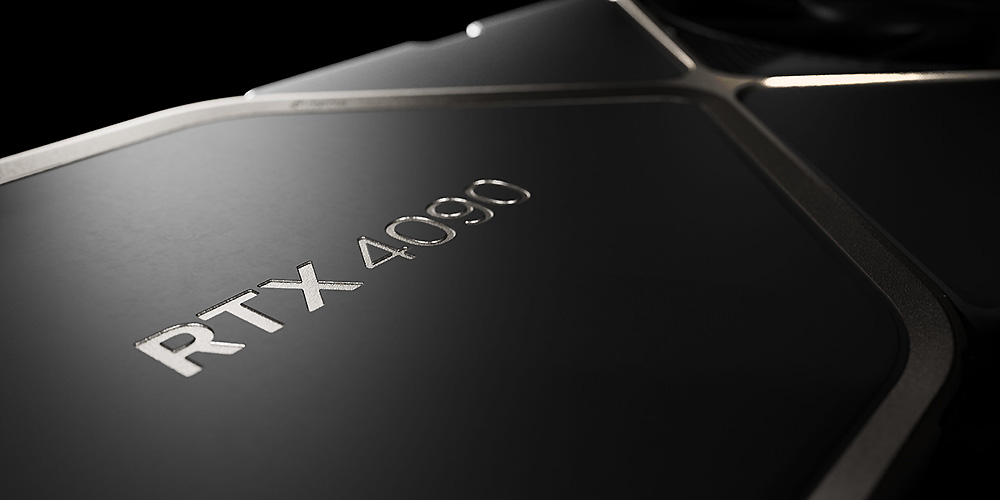 Another surprise that we take away from this demonstration is that NVIDIA itself has given consumption figures, using the latest PCAT update with support for the 16-pin PCIe 5.0 connector (12VHPWR). So with DLSS 3 offthe NVIDIA RTX 4090 reaches 461W on average, giving us a performance per watt of 0.135 FPS/joule. This is a figure somewhat higher than that achieved by the RTX 30, but it does not indicate a great leap in energy efficiency. However, when activate DLSS 3 efficiency shoots up 3.8 times, since it consumes 349W on average (25% less) and you get a performance per watt 0.513 FPS/joule. 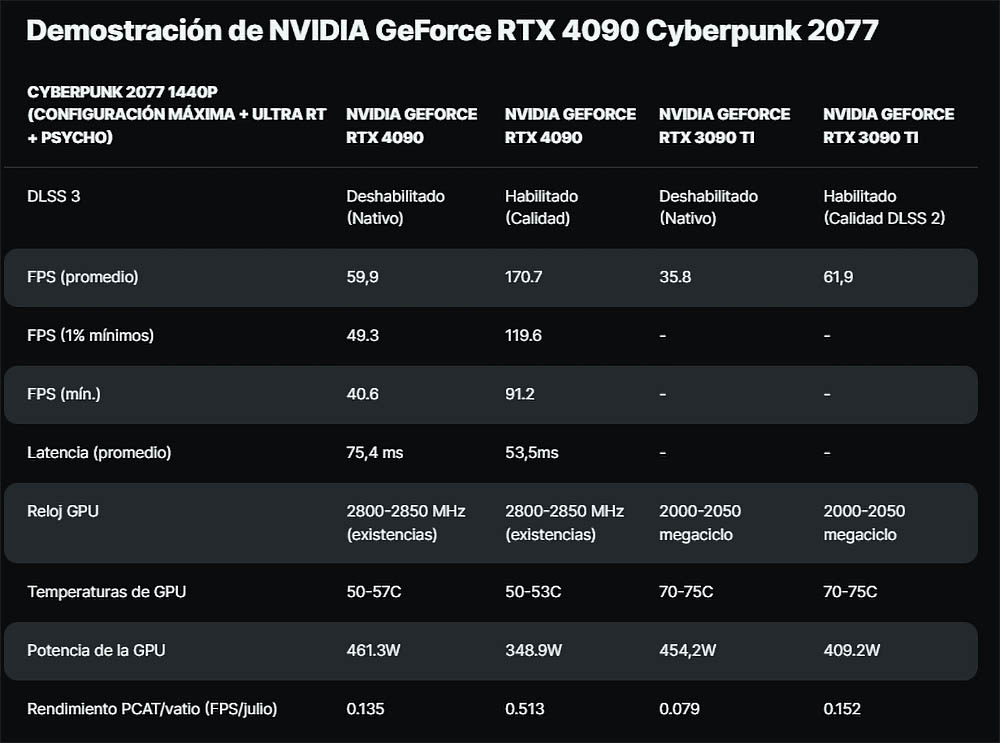 Now comes another interesting section and that is that the MSI RTX 3090 Ti SUPRIM X has been tested in the same scene and graphic settings of Cyberpunk 2077. Thanks to this, we have a accurate comparison what differences are there between the RTX 4090 and the RTX 3090 Ti in performance, consumption and temperature. We thus proceed to first analyze the frame rate of the RTX 3090 Ti in native resolution 1440P and maximum graphic settings with RT, giving an average of 35.8fps. Compared to the practically 60 FPS that the RTX 4090it leads with approximately one 62% more FPS without DLSS.