Most PC gamers know Steam and no wonder, since it is the most popular video game platform and store. Despite the fact that almost two decades have passed since its launch, Steam does not seem to grow in players and this is how we have seen a new record. Yesterday, November 26, Steam achieved a peak more than 31 million concurrent playersgoing back to overcome the previous record of 30 million and showing that even as the years go by, Valve’s platform continues to be the leader.

When it’s time to play pc gamesmost of us opt for the digital format. Are cheaper, we can store them in a digital library without taking up physical space and also, the download and installation is very fast if you have good Internet and an SSD. This is where it comes in Steam, as it is the best-known platform and store for these uses, by adding all the digital games purchased there. In fact, we can add up our own games and run them via Steam, so we can put all our titles in the same place. In addition, Steam also works as a social network, we can add friends, send messages and chat, join communities and upload content in the form of images or videos. 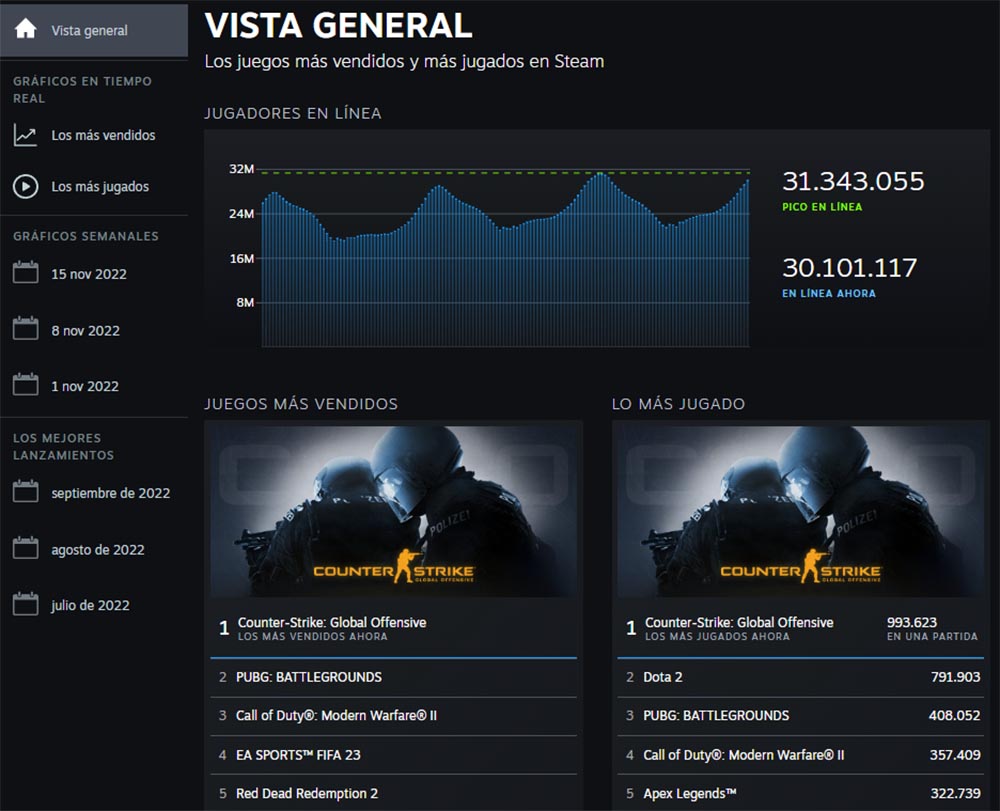 Steam started its fall sales And we can already see how these have allowed us to achieve a greater number of players in the Valve store. At the time of the news there were over 30 million players online, but a new peak of players was achieved yesterday afternoon. We talk about nothing less than approximately 31.34 million concurrent players on Steamthe highest figure the platform has achieved since its initial release in 2003. It is not surprising, since the vast majority of PC gamers know the name of Steam and now with their Steam Deck console, they manage to attract more types of users.

Regarding the games, as we can see, the Top 5 is full of online shooters, a guaranteed success on PC with keyboard and mouse. The unbeatable Counter-Strike: Global Offensive continues to top the list with its 993,623 players at the time, while the popular MOBA dota 2 is in second place with 791,903 players. In third position we have PUBG: BATTLEGROUNDSwhich conforms to 408,052 players. Following closely behind him, we have the very recent Call of Duty: Modern Warfare IIwhich almost catches up with PUBG with 357,409 players. In the last position of the Top 5 we would find ourselves at Apex Legends with 322,739 players.

Advertisement
Read  RGB speakers to be the life of the party

Steam sales increase the number of players in various games

If we proceed to see the top 100 most played games we can see the enormous influence that the sales have had on the number of players. But before that, note that lost ark is still very played with 240,527 playersnext to the old Team Fortress 2 with 106,527. Since the list is very long and the 100 titles do not fit, we comment above the most remarkable. GTA 5to the surprise of few, continues to have a very high player base with 158,956 currently and more taking into account that 63% discount. After him we have Naraka: Bladepoint with 133,806 players and at a price of €9.99.

From there we see that the discounts will be very important when it comes to maintaining a good number of players. For example, Civilization VI with his 90% discount have 80,775 players in the 12th place or ARK: Survival Evolved with 77,089 players and a 75% discount. In fact, Left 4 Dead 2 maintains 14th place with 69,969 players thanks to that price of 0.97 euro What does it currently cost? If we continue, further down we find ourselves at red dead redemption 2 by €19.79 and 65,502 players and Battlefield V by €4.99 and 59,047 players.