Today it’s time to talk about the AYANEO GEEK, AYANEO’s top-of-the-range portable console. On this occasion the company slightly expanded the information, such as specifications or, most importantly, its introductory price.

We start from the basis that we are facing a console built around a panel IPS of 7 inches that can be chosen at a resolution of 800p or 1200p to adapt to the needs of different user profiles. Despite the resolution, the hardware does not vary, running into a processor here AMD Ryzen 7 6800Uwhich can boast of moving any game without trouble on panels of this type. 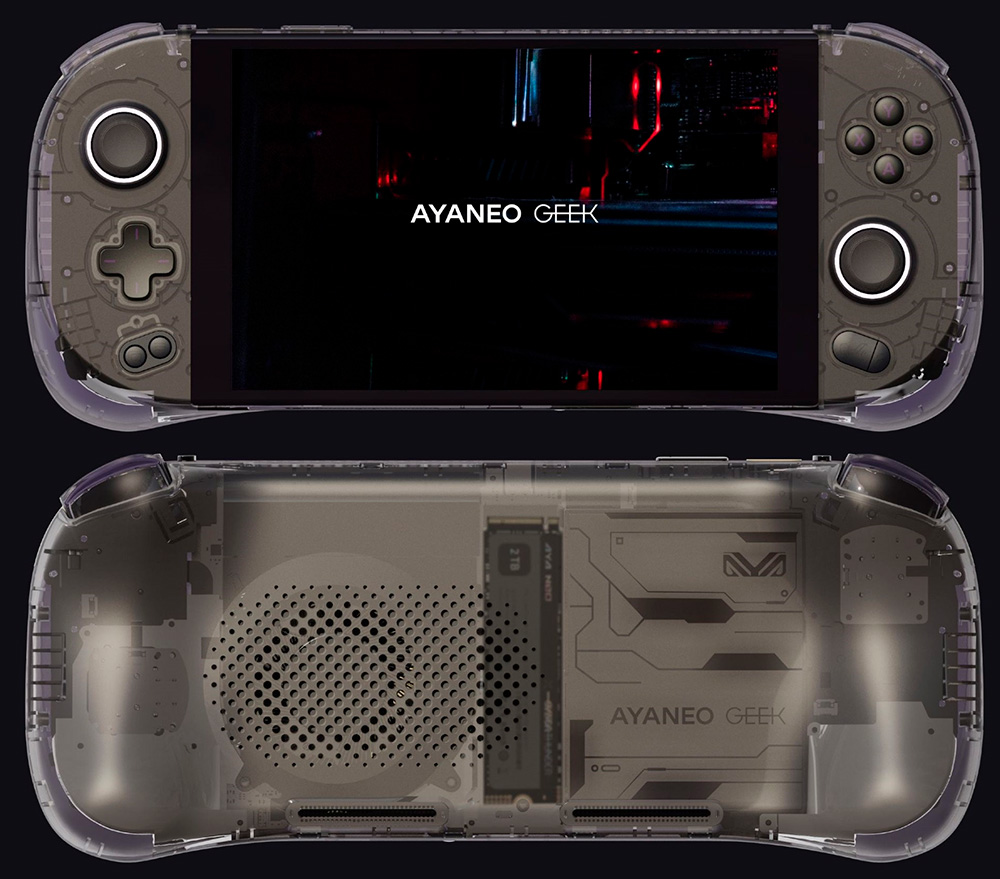 This processor offers a configuration with 8 cores and 12 processing threads under the architecture AMD Zen3+ to a 7nm manufacturing process. These are capable of reaching Base/Turbo frequencies of 2.70/4.70GHzand are accompanied by an iGPU, the already known AMD Radeon 680M.

This GPU offers a configuration of 768 Stream Processors @ 2.20 GHz under the AMD RDNA2 architecture, and this implies a great power for a console of this type. For reference, they are 50% more cores regarding the 512 Stream Processors offered by the integrated graphics in the Steam Deck. All this generates a consumption that moves between 15 and 28W.

This APU is accompanied by 16 GB of RAM LPDDR at 6400 MHz, while in terms of storage, you can choose between two storage capacities: 512 GB and 1 TB.

Beyond the hardware, in terms of connectivity, the console gives access to 3x USB-C 4.0 portsTF card reader to expand your storage, fingerprint reader to add a layer of security when logging in or making payments, wireless connectivity in the form of WiFi 6 + Bluetooth 5.2, double gyroscope, linear motor for vibration, improved grip compared to the previous model, and the use of the Windows 11 operating system / AYANEO OS.

Wrapping up the information, the official price of the AYANEO GEEK is 4,399 yuan, which translates to $635 / 625 eurosbut it is indicated that the price outside the Asian market could be around $725 – $750 / euros.

The GEEK, and the rest of the Ryzen 7 6800U consoles, will have access to an optimized SteamOS

It must be remembered that although all these consoles are based on the operating system Windows 11, Valve has already announced that it has a great interest in all of them being able to use SteamOS as well. The reason is more than obvious, and it is that it opens the doors to increase sales of your Steam platform.

Specific, Valve is optimizing its SteamOS operating system for AMD Ryzen 7 6800U processors, which is more powerful than the one seen on the Steam Deck, and requires special tuning to take advantage of this performance advantage. For this, a collaboration agreement was also closed with another well-known portable console company, GPD. This was in charge of announcing that it had contacted Valve to carry out a cooperation to optimize SteamOS to not only squeeze its full potential, but to guarantee stability and compatibility with its catalog of games.

Both online shops are currently offering the Asus TUF Dash F15, a gaming laptop that is as well equipped as...

Nintendo has sent an email where it ensures that reservations will open in the first half of October. JRPG fans...

Stadia would have canceled Kojima a sequel to Death Stranding, according to sources

That Kojima Productions was working on a video game for Stadia It is something that is taken for granted in...