A little over a month ago, we had a very excited Intel when talking about its Arc graphics. Under a long talk where they explained their XeSS technology and the performance of their high-end Arc A750 and A770 GPUs, they also revealed a release date. So these were expected in “sometime in summer“. Considering that it has already passed and we have nothing new, we can confirm a new delay in the blue company regarding the Intel Arc GPUs.

As we well know, Intel has returned to the graphics card market and this is great news as it indicates a new competitor in the market. With increasingly expensive graphicsfor all those users who do not seek to have the best performance, Intel Arc GPUs could be a solution. This is because Intel promised that they would be very competent, and since we already know that they are not competent in performance, they will have to be in price. However, the blue company is known for its numerous delays, so it is not always good to trust its dates.

Arc A750 and A770 GPUs suffer from constant delays by Intel 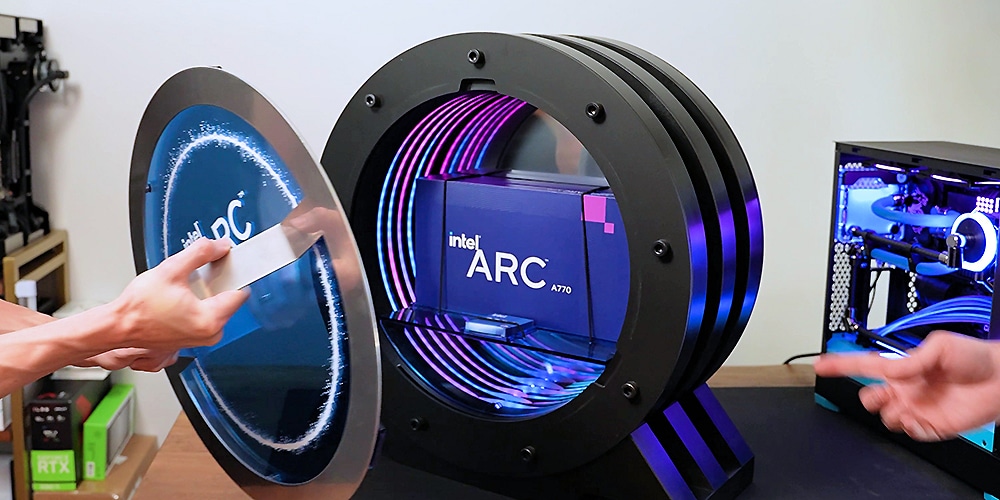 Intel has been announcing its Alchemist graphics cards for a long time, giving us new information, the occasional gaming benchmark or revealing its specifications. However, all this does not help much without a specific release date and a set price. And it is that, we already know practically everything about these GPUs, including their full specifications, but we do not know when they will really arrive. We do not stop seeing how Intel takes them to exhibitions and events, where we can see how they are installed on these PCs and can be tested.

However, about the launch date, we only receive approximate dates, which on top of that, are not met. For example, when they announced that they would be launched in the summer of 2022, something that as we see they have not arrived on time. We also have another date from Intel, which said they would arrive during the third trimesterwhich ends By the end of SeptemberCome on, what? they have a week to launch them if they want to meet this deadline. Finally, the last update of a possible date, is that the Intel GPUs Arc A580, A750 and A770, they will arrive at the end of the year. About which of these dates will be the real one, well probably the last one, taking into account the delays they have experienced.

We already have the first PC with an Arc A770, but neither date nor price

The popular YouTuber Marques Brownleehas mounted a PC with the Arc A770 Limited Edition, clearly indicating in the title that it is sponsored by Intel. This movement by the blue company is curious, since generally these types of graphics card assembly videos usually come out a few days before their launch. We could speculate that this date given by Intel a while ago that they would arrive during the third quarter could be true, although it is very unlikely. First, because currently Arc GPU graphics drivers They need to be greatly improved.

And it is that, although it is true that lately they have fixed many problems and bugs, the drivers are still very green compared to the competition. Here we go to the second point, welln NVIDIA will throw the RTX 4090 to almost 2,000 euros the next October 12 °while amd plans to present their RadeonRX7000 with RDNA 3 the November 3. That is why, among these important releases, the Intel GPU would be outshone in power and perhaps even in price, by both AMD and NVIDIA.

Because of this, perhaps Intel is delaying its release after seeing everything that its main rivals are going to bring to the market. And here, if you’re smart, you’ll pull out your Arc A580, A750, and A770 GPUs with the more polished drivers still cheap price that makes them consider a great bet for the return/euro invested. If it doesn’t meet the latter, neither in performance nor in controllers/drivers should it be able to compete. Let’s hope so, to be able to say that we have a cheap alternative in this sector.