Today we come across a Chinese game that has enjoyed great hype since it was first shown, Black Myth: Wukong. Perhaps it is because of its incredible graphics or its gameplay, similar to a Dark Souls game, although it is clear that it enters very well through the eyes. Now we have a new gameplay boasting of resolution 4K with Ray Tracing Y NVIDIA DLSS.

Chinese developer GameScienceannounced a video game that showed some triple AAA graphics along with very fluid animations. This was surprising to see in a lengthy 13-minute trailer in August 2020, when next-gen consoles like the Playstation 5 they had not yet reached the market. So, it was the rare occasion where a video game developed exclusively in China caught the attention of the Western public and well, the whole world. And it is that the title showed graphics worthy of the new generation, along with a combat that seemed to be very polished for its first appearance on the screen.

Black Myth: Wukong shows off his graphic power in this new 4K gameplay with NVIIA RTX

Posted yesterday by the NVIDIA YouTube channel, we have a new video of this long-awaited video game. this shows 8 minutes of exclusive gameplay of Black Myth: Wukong, taking advantage of the benefits of NVIDIA technologies. And it is that under the tagline NVIDIA RTX ON, the game is shown with Ray Tracing activated, which will give an even greater graphical improvement compared to the videos previously shown. Here the first thing that catches our attention is to see those puddles reflecting the sky and its surroundings. This is the main visual improvement that we find when using Ray Tracing, the reflexesbut it does not only affect this section.

And it is that ray tracing technology improves the shading and lighting of the title. As for the shadingalthough we do not have comparative tests, it is added ambient occlusion by Ray Tracing (RTAO) and allows you to add more depth and detail to the shading of neighboring objects or lush flora and trees. Regarding the lighting improvement, Ray Tracing adds Ray Traced Global Illuminationwhich allows you to more realistically illuminate scenes using the Light rays that bounce off the environment. Both are united in the same pack, since lighting and shading are improved at the same time. That said, in order to run the game at an acceptable FPS rate, they had to enable NVIDIA DLSS. 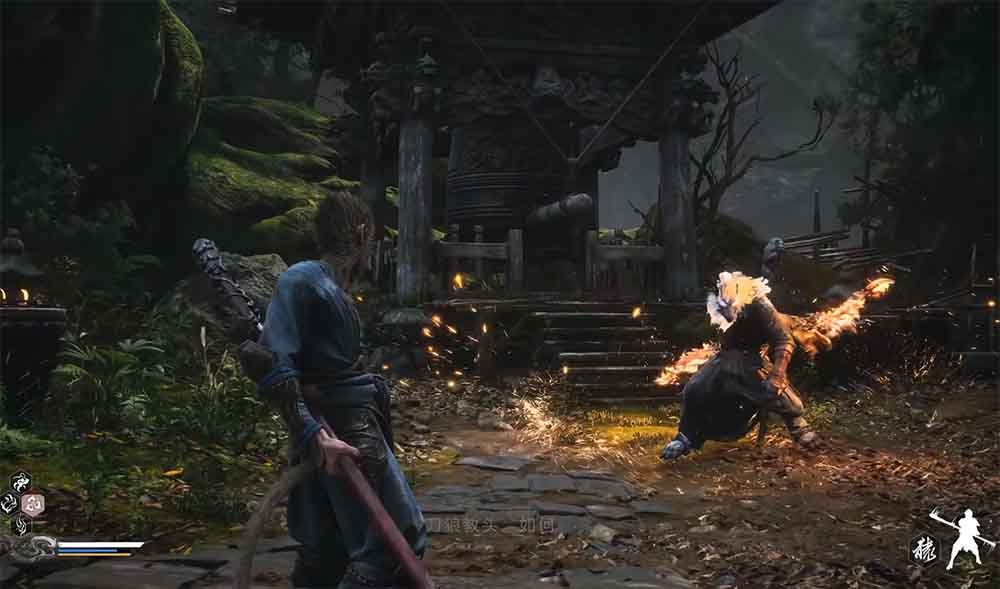 In addition to the new gameplay, the developers have shown a video of 6 minute cinematics of Black Myth: Wukong, where we can see the debut of new characters. And it is that, until now, we did not know much more about the characters of history, beyond Wukong as the main. In case you didn’t know, everything is based on the chinese mythologyso we control Sun Wukong, the Monkey King. This in turn is born from a novel epic genre known as Journey to the West. With all this, we have the bases on the strength and agility that our furry protagonist will have, in addition to his transformation capacity.

And it is that, as we saw in the videos, Wukong will be able to turn into different animals, like a insect to fly over the stage. Also, in Black Myth: Wukong, the developers assure that there will be more than 100 different types of enemies and will have one duration of at least 15 hours. It will make use of the powerful graphics engine Unreal Engine 5, which, as we know, gives fabulous results in the graphic section. To say so, that in this aspect, the particle systems employed in the game are phenomenal. Now that we have met part of their enemies and bosses, we would need to know more about their characters and history and for this reason, we leave you the video with cinematics about them.

The early access of the shooter-looter Marauders, a space adventure developed by the ‘indie’ studio Small Impact Games and that...