We already realize that we are getting old when Crysis’s own meme has already been surpassed by a graph like the Intel Arc A380. It must be remembered that this is the company’s most basic dedicated GPU, not to mention that it has been the only one that has managed to go on salealthough with some drivers that are not up to par.

Thanks to the latest performance tests of the custom model GUNNIR Intel Arc A380 Photon OCwe can know that this graph yes it can run crysisand decently. 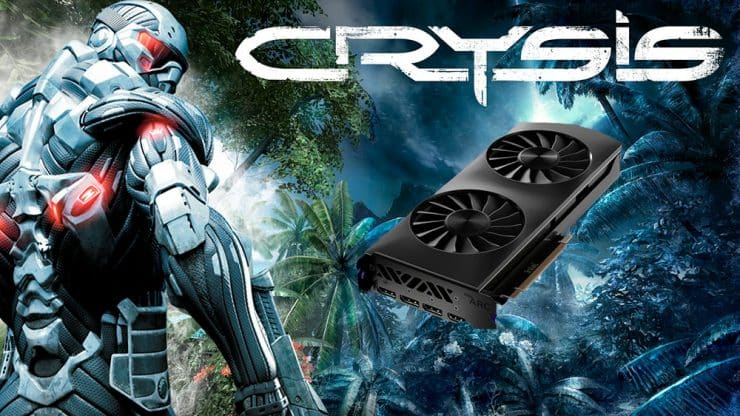 The test was carried out by the German YouTube channel PCGH Benchmarks & Analysis, where we are shown this graph running the game at a Full HD resolution of 1920 x 1080 pixels to a graphic quality Very high next to the filter MSAA x4 under the use of the API DirectX 10. It must be emphasized that this is the original game released in 2007, and not its remastering that we saw last year.

With this graphical setting, the GPU moves smoothly in performance that moves between the 60 to 70 FPS with peaks of 80 FPS, which implies an excellent gaming experience for this GPU, so by not suffering performance drops we will not see any stuttering problem. And if we add to that that these GPUs are practically optimized just thinking about DirectX 12 and VulkanWell, few complaints can we launch.

It must be remembered that the GUNNIR Intel Arc A380 Photon OC makes use of an Intel silicon ACM-G11 with 1024 cores overclocked at a frequency of 2450MHz along with 6 GB of GDDR6 @ 15.5 Gbps memory that, together with a 96-bit memory interface, gives us a bandwidth of 186GB/s.

This model is powered by an 8-pin PCI-Express connector, something more than necessary, since due to overclocking it consumes 92W powera considerable increase compared to the 75W that it consumes with reference frequencies.

The ‘You Can Run Crysis’ Meme Is Dead, A Replacement Is Needed

In 2007 Crytek revolutionized the video game industry with Crysis, a game ahead of its time for offering a graphic level never seen before. high enough to make any top-of-the-line gaming PC suffer of the industry. Moreover, no hardware of the time was able to move it with ease, having to reach new and various hardware iterations to be able to move the game with solvency, which ended up turning it into the yardstick around performance and, over the year, into a meme as a performance reference, since it was indicated that to play it you needed the very PC of The NASA.

Now, with Intel Arc A380 GPU benchmarks, we see how old is this meme, and it is that Crytek never lived up to it again or offered anything remarkable on a visual level. What’s more, the remastered version of Crysis received a lot of criticism, and on a visual level, the original game superior in some respectsnot to mention that of 2007, with modsleft in diapers the supposedly improved version that sought to revive the iconic meme.

Now all eyes turn to a future crisis 4. This game was officially announced in january this yearas a new game of the Crysis saga that was in the early stages of development.

Since then, 7 months have passed and no new details have been released, and knowing Crytek’s journey, and the performance of the different installments of Crysis, we are sure that with Crysis 4 they will try to find the graphic limit implemented by the original Crysis at the time, since they know that it will guarantee the success of its launch, at least at the advertising level of being able to revive a meme that has already gotten quite old.

Stadia would have canceled Kojima a sequel to Death Stranding, according to sources

That Kojima Productions was working on a video game for Stadia It is something that is taken for granted in...